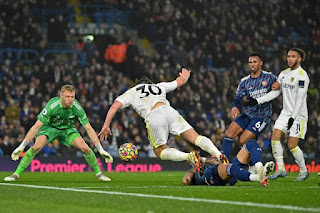 A disastrous first-half proved too damaging for an injury-hit Leeds United who fell to a 4-1 defeat against Arsenal in Saturday evening's Premier League clash at Elland Road.

Arsenal continually caused chaos in the first half, the Gunners helped by awful defending, and Mikel Arteta's side led 3-0 at the break as a brace from Gabriel Martinelli was followed by a Bukayo Saka strike.

Leeds improved after the break and Joe Gelhardt earned the Whites a 75th-minute penalty after being fouled by Ben White, Raphinha blasting home the spot kick into the top right corner.

Leeds began brightly and Raphinha headed over from an early corner from which Luke Ayling appeared to be blocked off in the box.

But Arsenal missed a sitter in the third minute when the Gunners played in Alexandre Lacazatte who was denied by the feet of Illan Meslier only for the loose ball to fall to Saka who rolled his shot wide from close range.

Seconds later, Thomas Partey was played down the same side but saw his low shot tipped behind for a corner.

But the Gunners went ahead in the 17th minute after Jack Harrison was dispossessed and Lacazette nicked the ball away from Adam Forshaw to find Martinelli who fired home a clinical finish into the top right corner.

Forshaw wanted a foul but VAR checked the incident and the goal was allowed to stand.

Leeds struggled to make any major inroads and Raphinha's attempted lob from the halfway line was easily caught by Gunners keeper Aaron Ramsdale.

After Kieran Tierney got in behind Raphinha, only a strong save by Meslier denied Arsenal a second, Tierney's low shot tipped behind for a corner.

Leeds then went agonisingly close to equalising on the counter attack from the corner as Forshaw sent away Raphinha who cut inside but fired just wide.

But Arsenal doubled their lead two minutes before the half hour mark when a Stuart Dallas pass was intercepted by Granit Xhaka whose through ball for Martinelli completely dissected the Whites defence and Martinelli produced another fine finish to beat Meslier.

After Leeds once again gave away possession, the Gunners worked the ball to Lacazette who was denied by another fine save from Meslier from close range.

But the visitors bagged a third in the 42nd minute as Leeds failed with several attempted tackles on the edge of the box and Saka's low shot deflected off Mateusz Klich into the corner of the net.

Meslier then pulled off yet another fine save to stop another low Saka drive from nestling into the same corner.

In the end, the Gunners only led 3-0 at the break when it could have been much worse, Arsenal having had 15 attempts at goal, 11 of which were on target, Leeds managing four attempts but without testing Ramsdale.

United were unchanged for the second half and Arsenal's Xhaka was very fortunate to escape any sort of punishment when going in on Raphinha's ankle four minutes after the break.

Yet referee Andre Marriner then booked Joe Gelhardt for catching Takehiro Tomiyasu on his ankle seconds later in a similar challenge without being quite as bad.

Stuart Dallas was then booked for a soft foul on the same player.

Leeds tried to rally, Roberts blazing well over from the edge of the box but Saka in particular continued to cause bother and the England star fired just wide after a neat one two in the Whites box.

Another shot from Roberts was then fired straight at Ramsdale but Gelhardt won Leeds a penalty with 17 minutes left when skipping towards the byline only to be taken out by a clumsy challenge from White.

Raphinha sent a blistering spot kick into the top right corner and minutes later Summerville volleyed over from close range after a Klich cross.

Klich and then Summerville were both taken off as Sam Greenwood and Liam McCarron were introduced as United's final two changes but the Gunners bagged a fourth in the 85th minute as Odegaard played in substitute Smith Rowe who volleyed home past Meslier.