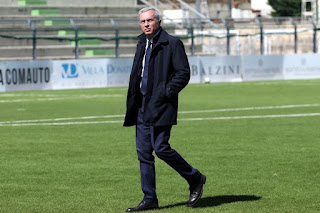 Leeds United's majority shareholder Andrea Radrizzani is not hoping to buy Italian clubs Pescara, Grosseto or Salernitana, despite reports to the contrary in the Milanese businessman's homeland.

That is according to Leeds United director Sandro Mencucci, who has addressed the rumours with Italian outlet FirenzeViola.it.

The former Fiorentina CEO was announced as a new board member at Elland Road towards the end of last season, but retains close links with the Florence-based club.

"[Are] We interested? No, not anymore, things must be done in due time," he said of Radrizzani's interest in Salernitana.

The Italian revealed this month that the Serie A side were at the forefront of his plans this summer, but that he never received a response to his proposal to buy the club.

"In July we would have had time to save her [Salernitana], in January you can't work miracles and who takes the responsibility of bringing her to Serie B?"

Salernitana look destined for the second tier of Italian football once again, sitting bottom of Serie A faced with the threat of expulsion if they cannot find a new, permanent owner within the week.

As a result, Italian news outlets have come to view Radrizzani as an angel investor of sorts, looking to rescue financially-maligned clubs and repeat the successes he has achieved with Leeds United.

Although, Mencucci insists this is not the truth of the matter.

In recent days, both Pescara and Grosseto have been named as clubs of potential interest to Radrizzani, but Mencucci denies the rumours.

"That's not true. Every day we are approached by a company in different difficulty, Pescara first, Grosseto now. But even if Radrizzani was interested in a sporting entity, he does not take one at random," he said.

Radrizzani has recently relinquished yet more of Leeds United to 49ers Enterprises, who increased their stake to 44% in November.

The Italian still retains a majority share in the club, but recent reports indicate he will hand over full control to the US consortium by January 2024.
Andrea Radrizzani