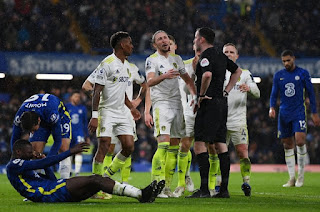 Leeds United have been fined £20,000 for the behaviour of their players after conceding a stoppage-time penalty at Chelsea.

Leeds players surrounded referee Chris Kavanagh to complain about his decision, backed up by video assistant referee Mike Dean, to give a penalty for Mateusz Klich's foul on Antonio Rudiger.

Jorginho converted the penalty, his second of the game, to hand the then-league leaders a narrow 3-2 win.

Leeds were charged after the match with failing to control their players.

Many commentators shared the Whites' view that it was a soft penalty.