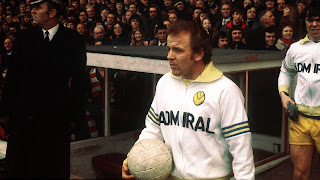 Heading into the Christmas fixtures of 1973, Leeds United were twenty games unbeaten and comfortably top of the First Division, having won more games, scored more goals, and conceded fewer than any other team in the competition. Norwich were third-bottom and destined for relegation, but manager John Bond saw nothing to worry about bringing his side to Elland Road. “I’ve been working on a couple of new things which could surprise Leeds,” Bond said. “We’ve tremendous respect for the Leeds players and for Don Revie but we don’t fear them. In fact, they don’t bother me at all. We intend to attack them and if we get the right result I am sure we will climb away from the bottom of the table.”

Don Revie was in the process of rebranding Dirty Leeds into Super Leeds, but his players were now being blamed for a wider gloom affecting English football. The final Saturday fixture before Christmas traditionally attracted the lowest attendance of the year, and supporters were hardly being encouraged by — this might sound familiar — uncertainty regarding trains, a shortage of petrol amid an oil crisis, and kick-off times being moved. With plenty of fans still considering Saturday part of their working week, clubs had already been given permission to play their upcoming FA Cup ties on a Sunday instead, but were so unsure of how to make the logistics work on the Lord’s Day they were seeking advice from the ‘ailing sport’ of rugby league. The day before Leeds played Norwich, the Reading Evening Post published an editorial discussing falling attendances under the headline, ‘Are fans lost forever?’

But forget all those problems. The true cause of low attendances across the Football League was Leeds United Football Club.

‘Leeds’ runaway pace at the top of the table has not helped,’ the Post said. The club that could never win entertainingly enough were now winning too emphatically. Even Middlesbrough, unbeaten away from home, were tarnished by association for the drop in crowds in the Second Division by ‘emulating manager Jack Charlton’s former club Leeds in threatening to sew up the title by March.’

Revie had bigger things to worry about. Billy Bremner was still trying to recover from an ankle injury suffered in the previous week’s win at Chelsea. The next time Bremner took to the pitch would be his 500th league appearance for Leeds, but Revie described his captain as “doubtful” to play Norwich, adding to an injury list already including Eddie Gray, Johnny Giles, Alan Clarke, Terry Cooper and Mick Bates.

Requiring a late fitness test, Bremner insisted he was going to play even though he was only half fit. He celebrated his landmark appearance by leading out the team holding placards spelling out the message ‘Merry Xmas’, perhaps in a nod to Slade securing Christmas number one with ‘Merry Xmas Everybody’, spreading festive cheer among a healthy crowd of almost 35,000 at Elland Road. Zoom in on the now iconic photo and it looks like Mick Jones has accidentally left a pre-match cigarette in his mouth. As part of evolving into Super Leeds, United were wearing the new smiley badge they had adopted earlier in the year, albeit the crest was still occasionally being stitched on upside down (here’s Norman Hunter looking absolutely ace in a tracksuit featuring the mistake). For the visit of Norwich, the sewing circle got it right for the tracksuit. The shirt wasn’t so lucky, so the badge on the Leeds players’ chests was mirroring the frowns on the opposition’s faces.

Norwich failed to live up to Bond’s promise of attacking Leeds, relying on goalkeeper Kevin Keelan saving from a Jones header and a Peter Lorimer shot. When the evening edition of The Football Post was published, their half-time report was headlined, ‘Norwich cheat Bremner’. It was an unfortunate angle given a final paragraph had obviously been added just before going to print: ‘Terry Yorath headed Leeds in front after 57 minutes.’ The Liverpool Echo paid more attention, publishing the same report under the more accurate headline, ‘And Leeds go marching on…’

The description did not do justice to Yorath’s header, the only goal of the game. Writing in The Sunday Mirror, Arthur Brooks described the goal as a ‘streamlined diving header’. In The Yorkshire Post, Barry Foster asked, ’Where would Leeds have been without Yorath on Saturday? With Billy Bremner only fifty per cent fit and Leeds lacking three other midfield men because of injury there was a call to be answered — and Yorath had the answer.’

Despite the defeat, Norwich goalkeeper Keelan was following his manager’s lead in refusing to be impressed by Leeds. “Yorath did well — but everything was with him because when he knocked it down the ball hit a greasy patch and it was the skid that beat me,” whined Tim Krul’s precursor.

Maintaining the Scrooge spirit, the post-match narrative quickly turned back to crowds around the country. Leeds could be excused for failing to see the problem. After struggling to win support both inside and outside the city for so long, the public were now taking them to heart. By the end of the year, Geoffrey Green was pointing out in The Times that Leeds had already been watched by over a million fans across the first half of the season, and the average attendance for their away fixtures was the highest in the country: ‘They have succeeded so far in taking a duster to the slate with the happy result that they are now not only a better side, but have also achieved a new stature that is attracting the attention of a selective public.’

Again, Revie had more important matters on his mind. He spent the day after the game writing to Sheffield Wednesday chairman Matt Shepard, imploring him not to sack manager Derek Dooley. Wednesday were struggling and lost 3-0 to Fulham the previous week, at the same time as their reserves were playing against Leeds and producing a performance described by coaches Maurice Lindley and Syd Owen as “the best we have ever seen in the Central League.” With promising young players developing beneath the first team, Dooley’s predicament reminded Revie of the task he faced after taking over at Leeds.

Homesick and aching for a move throughout much of his early years at Leeds, Bremner was one of the young players Revie had to patiently nurture when United were still struggling in the Second Division. 500 league games later, Revie was determined to ensure the day belonged to the man he trusted to lead his family of players. “Didn’t he do well — when he was only fifty per cent fit?” he said. “Billy insisted on playing. His sheer presence makes a hell of a difference to the rest of the lads.” At least The Sunday Mirror’s Arthur Brooks was cheered by Bremner and the boys’ Christmas spirit. ‘Even as a half-fit hero in pain,’ he wrote, ‘he’s a hell of a player.’