Leeds United: Why change of mindset may be required by Marcelo Bielsa to pull Whites clear of Premier League trouble - Yorkshire Post 15/12/21 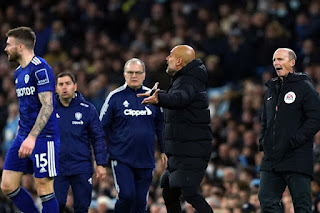 In the aftermath of Leeds United’s worst performance of his tenure and joint-biggest defeat in their history, Marcelo Bielsa doubled down on his January transfer window stance. Supporters can only hope he is less stubborn in private.

Leeds’s problems against a rampant Manchester City were basic – unable to get close enough to City’s carousel of attacking players and struggling to keep the ball, 7-0 was a fair scoreline.

If Bielsa wanted to change things, options were scarce. Mateusz Klich, a mainstay until losing form and his coach’s faith in 2021, came on in the first half, but the other eight substitutes had one Premier League start combined. Manchester City brought on Ilkay Gundogan and Fernandinho but not Raheem Sterling or Gabriel Jesus.

It may be worse against Arsenal on Saturday. Expect Liam Cooper, Kalvin Phillips and Patrick Bamford to still be out. Rodrigo and Pascal Struijk are in too much pain to train as Robin Koch is doing this week for the first time since August.

Right-back Jamie Shackleton hobbled off on Tuesday with a calf problem and left-back Junior Firpo picked up a suspension.

After the game Bielsa was asked if he needed bodies for the sake of it rather than insisting on only bringing in players better than he has already.

“It is a question I have answered various times,” he told an interviewer who almost certainly knew the answer but had to ask. “I don’t have a different answer.

“Nobody prepares for such a succession of injuries. The capacity for the institution (club) to strengthen the squad has a limit due to their budget. The chairman (Andrea Radrizzani) has acted in a more than sufficient manner.”

It is not just Leeds fans who revere their eccentric coach – even if Tuesday made some waver – but the hierarchy too.

Had Bielsa asked Radrizzani to meet Huddersfield Town’s price for Lewis O’Brien in the summer, it is hard to imagine a no. He is not being held back by a penny-pinching regime, but himself.

Joe Gelhardt already looks a better centre-forward than wingers Dan James or Jack Harrison but Bielsa got irritated when asked about the 19-year-old on Tuesday, and when questioned about Lewis Bate before the game.

“Sounds more like the question of a parent or an agent, not a journalist,” was his joke with an edge.

If he wants to flesh out a small squad with youngsters, he must trust them. If he demands they win his belief over time, he needs more seniors to buy it. A youngster will surely make his first (Cody Drameh) or second (Charlie Cresswell) league start in Saturday’s back four.

Leeds will not push Bielsa. They are too in thrall to him and demanding he goes against his principles is tantamount to asking for his resignation. The change of mindset has to come from Bielsa but it does have to come, whatever he says in public.