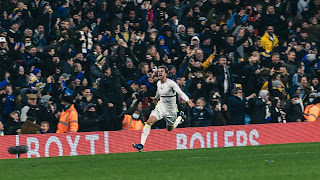 Fun fact: the iconic 1-11 loads of us memorised when Leeds United won the league title in 1991/92 only started nine league games together that season. Injuries were a constant problem, although Howard Wilkinson could normally tell enough of his hobbling players to stop putting it on and push them down the tunnel to make it look like a first team, and that one time he threatened (maybe a different season, don’t remember) to drug David Batty and hope nobody tested him was honestly just him joking. Plus we won the league so it was fine.

This year’s brief dalliance with something resembling Marcelo Bielsa’s first team got us a draw with Brentford — big deal! — and now they’re all broken again and what the heck. It’s hard not to feel the glee with which the Mail have teased their ‘Bamford Injury Nightmare’ story on their back page: ‘Their next four games are against Chelsea, Manchester City, Arsenal and Liverpool’ they write, just after the words ‘six points above the drop zone’. YES WE KNOW.

Bamford is only the first course. According to the Mail he injured himself celebrating that last minute goal and, yes, if you go back to the tape you can see him wincing as he emerges from the scrum of players, watch him sitting down on the ground at full-time with the face of someone who knows he’s just hurt himself mucking about being silly, looking around for someone he can tell without getting into trouble. The Mail are calling this a ‘tweak’ to his hamstring and not committing to timescales, only committing to it being a DISASTER. I’m not arguing!

When he went off against Brentford on Sunday it looked like from his troublesome calf, but he was holding his knee a bit, the Telegraph (and the Mail, they’re in on this too) say hamstring. No tweaks here, it’s an injury. And that’s it, that’s the news, no quotes no nothing, you don’t need to read anything else anywhere else today because they’re all full of unhelpful reminders about our record with Kalvin and without Kalvin, as Paul Heckingbottom would say (the Mail have even done an infographic, the monsters). Your main course: Kalvin Phillips, hamstring injury, two months. If that’s two months from Sunday he could be back in time for Aston Villa away on 8th February. That’s something to look forward to! Just do yourself a favour and don’t look up the games he’ll miss.

Dessert? That would be news about Liam Cooper, who got this new wave of hurt rolling after quarter of an hour on Sunday, but nobody is reporting anything about him. ‘Also facing a spell on the sidelines’, says the Mail, and the absence of detail feels a bit mean. Don’t treat our club captain like an afterthought you pigs, he’s important to us!

That’s it, unless the witches in the well under Elland Road who were obviously disturbed back into action when the pitch was relaid in summer have any more treats for us this week. There’s probably some calm upsides to be found about how Bamford’s not hurt too bad, Kalvin will be back for the run in and maybe nobody will want to buy him after this (he’s injury prone, back off PSG), it might force a January buy, Lewis Bate might get a chance, we have other players (THEY’RE ALL HURT TOO), blah blah blah. But I’ve not even had breakfast yet and I’ve already eaten too much.