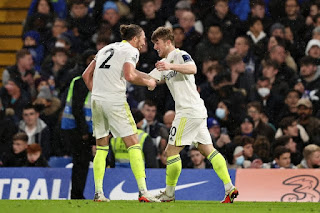 Five key players missing was bad enough, especially facing title-chasing Chelsea in their own back yard.

Five then became six as Pascal Struijk failed to even make the bench at Stamford Bridge due to a foot injury, joining Kalvin Phillips, Patrick Bamford, Liam Cooper, Rodrigo and Robin Koch on the sidelines.

Yet Marcelo Bielsa’s Whites really should have left Stamford Bridge with at the very least a point, two risky decisions and one loose touch costing an otherwise impressive Leeds side dear.

Chelsea had 16 attempts on goal compared to 12 from Bielsa’s side although only one more on target than Leeds, the Blues having six on target compared to United’s five.

The hosts also had 58 per cent of the game’s possession, not that possession wins any prizes, as Leeds know having themselves previously dominated the ball in certain games but without getting the full reward.

But even in very difficult circumstances, this was another case of Leeds not picking up what their performance merited with all three Chelsea goals very much avoidable.

The Blues began Saturday afternoon’s contest brightly but Leeds were more than containing what the hosts had to offer, the Whites continually pressing the Blues and putting in some very firm but fair challenges.

Adam Forshaw and Dallas were particularly strong in the opening exchanges and United then began to threaten themselves.

As such, despite the absentees, it was no real surprise when Leeds went in front via Raphinha’s very cool penalty awarded for Marcos Alonso’s foul on Dan James.

Despite the Blues huffing and puffing, United looked set to take their one-goal advantage into the interval.

But a rare error from Dallas who failed to properly control an Illan Meslier pass allowed Alonso to pick his pocket and supply a pull back for Mason Mount who was never going to miss, especially with Meslier coming away from his near post.

The goal gave the Blues fresh momentum and Thomas Tuchel’s side threatened to bag a second but Leeds held firm before once again offering an attacking threat after the break.

But two second-half penalties then proved United’s undoing and the attempted challenges from Raphinha and Mateusz Klich, both on the excellent Antonio Rudiger, just looked like risky decisions.

Former Liverpool star Jamie Carragher has regularly stated during his analysis on Sky Sports that his advice to young defenders new to the game would be don’t dive into challenges in the area, or even not tackle. Block instead.

The theory is that any even slightly mistimed challenge will be punished these days due to VAR which ultimately did for Raphinha after the intervention of Mike Dean.

VAR was not needed for Klich’s challenge which looked even more unnecessary with Rudiger on the very edge of the box and with his back to goal.

Despite both producing very good performances, Raphinha and Klich both paid the price as Leeds fell to a heartbreaking defeat with Jorginho’s second spot kick converted in the 94th minute.

The winner arrived 11 minutes after Joe Gelhardt had equalised with his first touch, 81 seconds after coming on, the teen clinically converting following a fine cross from Tyler Roberts.

Gelhardt looks a special talent and even though he is only 19 years old, the young striker already looks worth starting, or, at the very least, afforded longer than ten minutes off the bench.

But despite his strike Leeds fell to a cruel defeat which will have been very hard to take and United deserve huge credit for both their attacking endeavour and largely fine defending, those three incidents aside.

If United can continually repeat performances like Saturday’s, especially when their key players return, they will be more than fine though Leeds are still only 15th and far too close to the drop zone for comfort.

The Whites are now in the run of an extremely demanding set of fixtures, facing four of the division’s top seven in the space of 16 days including the top three - all away from home.

A brutal run of fixtures as David Prutton called it in his Saturday YEP column.

The first instalment of that run has definitely proved one that got away.