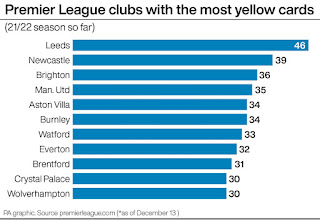 Mandatory suspensions are the last thing Bielsa needs as his squad continues to struggle with an injury crisis from which there appears to be no immediate respite, with all those who missed Saturday’s draw at Chelsea remaining sidelined.

But with five more players booked at Stamford Bridge more yellow cards against Pep Guardiola’s men could further hamper Bielsa’s hopes of wrenching his side out of the relegation dogfight during the busy festive period.

Bielsa said: “There is no need for any added recommendation to the one we usually make – just to avoid actions that will get you booked.

“That recommendation is never conditioned to the amount of bookings a player is on, because even if they weren’t close to a suspension, we don’t want them to produce excessive actions.

“I don’t think that we are a violent team and I don’t think we are defending worse and for that reason there is more hits. We always try not to be booked, whether we’re on the limit of yellows or not.”

Kalvin Phillips, Patrick Bamford, Liam Cooper, Robin Koch, Rodrigo and Pascal Struijk are all still out for the trip to City, with Bielsa coy on reports that England star Phillips is set to undergo surgery, either on his injured hamstring or a long-standing shoulder problem.

“I can’t clarify anything on Kalvin at the moment,” added Bielsa. “There is no news on whether he is going to be operated on. At the moment I have no precise news over his hamstring tendon or his shoulder.”

Bielsa admitted the injuries to Struijk and Rodrigo in particular were ones he had never seen before, with both issues stemming from colliding bones in the players’ foot and heel respectively.

“The injury Pascal has is unusual,” said Bielsa. “An explosive moment made two bones in his feet collide together and that doesn’t generate an injury but has the effect of a knock on his bone and that generates pain.

“Until that pain disappears it’s going to prevent him from playing. In my whole career I’ve never seen an injury like that.

“The same as Rodrigo’s injury, an injury in his heel, which only disappears if the pain disappears, which I also haven’t seen in many years. The specialists who treat it say there’s very few cases like this.”