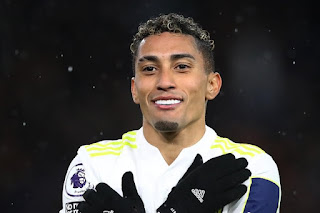 A January move to Bayern Munich is unlikely for Leeds United star Raphinha despite press reports in Brazil.

TNT Sports Brasil broke a Christmas Eve story that the winger is due to join the German giants for a sum in the region of £40m, but the YEP understands Bayern Munich are yet to make any interest known to the Premier League outfit.

Leeds have made little secret of their acceptance that player sales will be necessary if they are to follow the Leicester City model, but a January departure would make next to no sense for the man carrying their main attacking threat in a difficult first half of the season. Raphinha has followed up the six goals and nine assists from his debut season at Elland Road with a further eight goals in 16 top flight games this season. He's Marcelo Bielsa's leading goalscorer and few of his fellow attackers have been able to match his consistency.

The 25-year-old's contract is due to run out on June 30 2024 but talks are ongoing over an improved deal at Elland Road. Raphinha's agent, former Portugal international Deco, attended the Arsenal game on December 18.

The TNT Sports Brasil story, which suggested Raphinha's youth club Avaí FC had already allocated money that would be due to them as part of the deal, is yet to be corroborated in either West Yorkshire or Munich. Instead, German publication BILD say their information is that a mid-season move for Raphinha is 'unlikely' and any attempt to sign a winger would only take place if one of Julian Nagelsmann's current wide players was to leave.

A thoughtful gesture from Leeds United.https://t.co/rUvbIRqgOE#lufc

Raphinha, who broke into the Brazil side this season, was due to be in Boxing Day action against Liverpool - another side believed to be keen on his services - before a Covid-19 outbreak closed Thorp Arch and forced the game's postponement. The Premier League is yet to confirm whether or not the Elland Road clash with Aston Villa, scheduled for Tuesday December 28, will also succumb to the Whites' inability to raise a squad.

Leeds signed the flair player from Rennes in October 2020 for a remarkable sum of just £17m. He followed a well-trodden path from Brazil to Portugal, joining Vitória Guimarães in February 2016 before moving to Sporting and then Rennes.