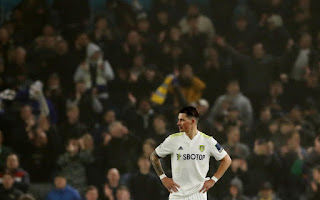 Robin Koch has issued a passionate reflection on playing his first game at Elland Road with the Leeds United supporters in the ground.

Leeds lost 4-1 to Arsenal on Saturday evening, suffering another damaging defeat amid an injury crisis.

That injury crisis meant that Koch was thrown straight into the starting XI after recovering from pelvic surgery and illness. It was his first outing since the opening day defeat to Manchester United at Old Trafford.

It was also Koch’s first experience of playing in-front of a capacity Elland Road crowd, having only featured for Leeds before under restricted attendances.

Of course I’m disappointed with the game & result yesterday. But finally I know that special feeling of playing in front of a full Elland Road, in front of our incredibly great fans. Together we can fight for the results Leeds deserves & I’m glad that I can help the lads again. pic.twitter.com/tVOkP9QTsZ

Despite the disappointment of Arsenal wiping the floor with Leeds, Koch took to Twitter to reflect on his first taste of a unique atmosphere:

It’s easy to forget that for Koch he’s never had the real experience of playing in-front of the Leeds fans at Elland Road.

The atmosphere on Saturday was special in a strange way.

Leeds were poor and were beaten heavily again, but the fans stuck by the players and Marcelo Bielsa, singing until the very end.

Given Koch’s message here, it seems that isn’t lost on the playing squad one bit.