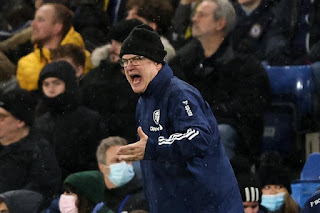 Marcelo Bielsa has vowed to stay and fight until the end of the season at Leeds United.

Marcelo Bielsa has vowed to stay and fight until the end of the season at Leeds United.

The Argentine was pressed on his future after a 7-0 defeat by Manchester City and ahead of an Arsenal game for which eight of his 18 senior players will be unavailable.

Leeds have won just three of their 17 Premier League games this season and despite producing a fine performance at Chelsea on Saturday, were unable to follow it up with another at the Etihad. They sit 16th in the top flight table with a five point cushion between them and Burnley, who lead the trio of clubs currently occupying the drop zone. They're also four points off 11th place thanks to their fellow midtable sides struggling to pull away during Leeds' difficult spell.

Tuesday's humiliation left Bielsa visibly downbeat after the game, but speaking on Thursday morning as he looked ahead to the Elland Road clash with the Gunners, Leeds' head coach was well up for the challenge facing him.

He fired back at questions over his ability to lead the club forward with questions of his own and statements of intent.

"Of course I am going to continue fighting until the end of the season," he said with a wry laugh.

"I always think with adversity you have to fight, you never know if strength is going to be enough and what the progression is of the difficulties we face.

"Having said that, I am going to fight until the end of the season without any doubts. I hope nothing happens that doesn’t allow me to act on what I’ve said.”

When he was then asked if he feared the sack, Bielsa made it clear he's no less vulnerable than any manager but reiterated his desire to keep fighting.

“Do you think that any coach isn’t able to be sacked?" he asked.

"Do you think that after suffering a 7-0 defeat I can disregard the instability? Do you think I’m so vain that I think I can’t be sacked?

“The job of a coach is not stable. I don’t have anything that makes me immune from that characteristic.

“After losing 7-0 it is the situation I have to live through. In all of these circumstances, all I can do is fight.”

His job this week, he said, was to be upbeat and to ensure the Leeds that runs out to face Arsenal is the one that gave Chelsea such a difficult game at Stamford Bridge, rather than the one that trudged off with a record-equaling defeat in midweek.

“The confidence and fortitude of the players is linked to what they do on the pitch," he said.

“Against Chelsea we played our best game of the season, against City it was the worst.

“Both versions were produced with two or three days of difference. I have the confidence and obligation to manage for us to reproduce the performance against Chelsea, not the one against City.”