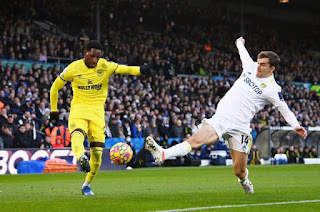 Leeds earned a dramatic 2-2 draw with Brentford on Sunday deep into added time through Patrick Bamford which followed up a 94th-minute winner from Raphinha against Crystal Palace in midweek.

On both occasions the goals resulted in complete chaos in the stands at the club’s home ground.

Marcelo Bielsa saw his side return five points from their three league games in eight days and the two injury-time efforts put a very different spin on things, as the Whites now sit six points clear of the top-flight drop zone in 15th position.

Leeds now face a tricky run of fixtures over the festive period that starts this weekend with a clash at Chelsea before matches against Manchester City, Arsenal and Liverpool to conclude on Boxing Day.

Llorente, who joined the club around 18 months ago from La Liga outfit Real Sociedad, is enjoying his first full campaign in England in front of fans after Covid restrictions were lifted earlier this year.

United’s home support has been sold out each week and the 28-year-old has been mightily impressed by what he has experienced, with last week’s drama only adding to it.

“They give me an incredible and an amazing feeling,” Llorente said of United’s fanatical support.

“In the opening few minutes, I am always thinking to myself ‘Wow!’ because the noise in the first five minutes is like a Champions League final. In Spain it is different. The fans do support the team, but here there is more support and at Elland Road everyone supports the team together.

“So, I have to say ‘thank you very much’ to the fans and to all the supporters everywhere.”

Llorente has featured in 11 Premier League games this term following a difficult start to the 2021/22 season.

The Spain international picked up two separate knocks which hampered his involvement early on and followed what was an injury-hit debut term last year.

He is, though, now fully fit and able after featuring in Bielsa’s side in each of their last nine league outings.

“It was a hard start to the season because I had two injuries. But, now I am fit, I want to help the team in every game I can,” he added.

“For me, I think the adaptation was hard at first. I think now in my second year I have learnt a lot from the previous year. I learned many things, I know my body better now and know when to push a little bit and when it is better to stop.

“It was a hard year of learning last year and, this year I hope I can help the team in more games.”