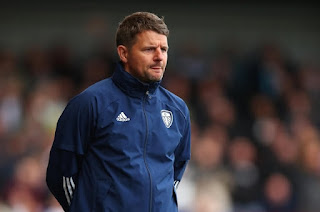 It has been an up and down year for Leeds United’s academy in 2021.

Mark Jackson toasted huge success in the summer after guiding the club’s development side into the top tier of England’s elite academy structure.

Leeds, at the first time of asking as a category one training facility, romped to the Division Two title in the Premier League 2.

The Whites were no match for any of their rivals, claiming the league by a margin of 11 points – earning 18 victories, two draws and losing four times.

Jackson saw his side concede just 29 goals in 24 league games last term but a summer of change has meant a mixed end to 2021.

Football doesn’t stand still at whatever level you ply your trade – be it in the Premier League or in the ranks below.

Fast forward six months and United sit 13th in the top tier of the PL2 following promotion, holding one of the bottom two relegation places heading into the new year.

The transition has been tough due to a number of reasons – first-team injuries filtering down impacting game time for youngsters whilst new faces adjust to the Leeds United way at Thorp Arch.

Last week’s 0-0 draw at home to Everton secured only a second clean sheet in 15 games and extended the Under-23s winless run to 10 matches.

The unsettled nature of the team has led to defensive problems while it is the nature of the beast that there is no hiding place among the top academies the country has to offer.

Jackson, though, has been philosophical about the nature of the beast at development level amid a year of vast change.

“It’s been up and down,” Jackson reflected on 2021 as a whole for his youngsters.

“We’ve had to take a few results on the chin. Not getting three points, losing leads and dominating games and maybe not getting what we deserved. But ultimately we have seen players progress.

“I think within the group of players we have seen progression in them individually.

“We’ve seen players getting opportunities in the manager’s team as well and ultimately that is what we’re here for to help develop the players.

“In the new year we’ll be looking to maintain that development but hopefully we have learnt a little bit from that first part of the season where we can turn our performances into wins.

“League positions and victories have not been what we wanted. But elements of our performances have.

“I don’t want to contradict myself and say we’re not getting the rub of the green but a lot of our play has been good. It’s been coupled with new players coming into the club and learning the system.

“Obviously we’ve had to deal with a lot of injuries as well. We have predominantly been a young 23s team and those players who have stepped up have got valuable experience, which is money in the bank for them.”

Results haven’t been at the forefront of United’s mind this season but they will be when January comes around.

Leeds – though not entirely focused on winning being the be all and end all of youth football – want to navigate themselves into mid-table safety to continue playing the likes of Manchester City, Chelsea, Arsenal and others.

“Certainly in the second half of the season we’ll be looking to turn those performances into victories,” Jackson added.

“That’s what we need to do and that’s what we’ll be challenging our lads to do. Us as a staff too because we’re all one. We win, lose and draw together as a group.”