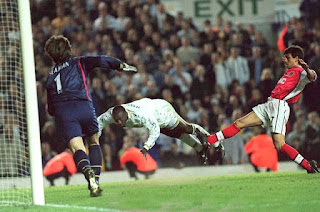 One-nil to the Arsenal they used to say.

Yet 22 and a half years ago it was one-nil to the Leeds, David O’Leary’s Whites sinking the Gunners via Jimmy Floyd-Hasselbaink’s late winner for what proved a fatal blow to the visiting side’s title bid.

The Whites and Gunners will lock horns once again at Elland Road tonight, but back in May 1999 both sides were in the higher reaches of the Premier League table.

Arsene Wenger’s table-topping Gunners arrived for the Tuesday night fixture in Yorkshire seeking a sixth league win in succession having recorded a 3-1 victory at Tottenham the previous midweek.

Yet David O’Leary’s Whites had been in fine form themselves – the previous midweek’s 1-0 loss at Chelsea becoming a first loss in 12 games – and United got back on track against the Gunners, for whom defeat ultimately cost them the title

The Gunners needed a victory to keep their title destiny in their own hands but a fourth-placed Leeds side were also looking to end the season in style, the Whites on their way to qualifying for the UEFA Cup back in the days when only the top three was good enough for a Champions League spot.

The Gunners went close to taking the lead when an outswinging Petit corner was flicked goalwards by Vieira and Adams fired in a low shot which Martyn saved with an outstretched boot.

At the other end, Seaman then denied Leeds with a flying save to turn a rising 30-yard drive from Kewell around the post.

The Whites were then presented with a golden chance to go ahead as O’Leary’s side were awarded a penalty after Keown made a mess of a defensive clearance and also his attempts to rectify the error.

Young striker Smith took control of Keown’s misplaced header near the byline only for Keown to come racing in and take out the striker with a sliding challenge as Smith produced some nifty footwork.

“I won the ball,” said a furious Keown – but he didn’t, and up stepped Harte to take the spot kick.

Harte, though, smashed his penalty against the crossbar and Seaman reacted brilliantly to save Hasselbaink’s powerful volley on the rebound.

That particular net was living a charmed life, and after the break only a goal-line clearance from Radebe at the same end kept out a strike from Bergkamp, whose follow-up attempt from a very acute angle was beaten away by Martyn.

Martyn then thwarted Kanu from Anelka’s cutback and substitute Kaba Diawara’s vicious volley was brilliantly headed off the line by Woodgate. A Diawara header from a corner then clipped the top of the ’bar.

And it was Leeds who bagged what proved the game’s winning goal with just four minutes left. Smith fed Kewell on the left flank and the Australian beat Dixon before sending a brilliant delivery to the back post.

The ball flew through the air and Hasselbaink stormed in to convert a diving header, Seaman left with no chance after being taken out by Kewell’s cross.

Defeat left Arsenal level on points with Manchester United but with just one game left, and the Red Devils edged a point ahead by drawing the following night’s game in hand at Blackburn Rovers.

Both sides then won their final fixture but the Gunners had to settle for second, the damage done at Elland Road.