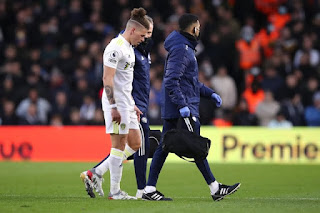 Just over three weeks ago, Kalvin Phillips gave a masterclass in how to deal with a problem that barely existed a few years ago –playing as a centre-back against a “false nine”.

There was great surprise when the midfielder lined up in the centre of Leeds United’s defence at the Tottenham Hotspur Stadium, given that Liam Cooper, Pascal Struijk and Diego Llorente were all playing, the latter pair at full-back.

Soon, though, it became clear it was a Marcelo Bielsa masterstroke, Phillips proving the perfect man to follow and nullify Harry Kane when the Spurs striker dropped off the front, as he so often does these days.

As if Phillips was not already important enough to Leeds, it was another reminder of the qualities of a player whose talents have come to national and international attention in 2021. It means that of all the many injuries his club are collecting this season, those to him are that much more worrying.

With the greatest of respect to Cooper, Rodrigo and even Patrick Bamford, all of whom are expected to miss today’s Premier League game at Chelsea, it is Phillips the fingers are most tightly crossed for.

Bielsa tends to be very coy about putting return dates on his players – they are, he simply says in his No 1 press conference catchphrase “subject to the evolution of the injury”. Phillips’s hamstring tendon injury is no different.

The captain, the record signing and the centre-forward whose return Leeds have been pining for since mid-September, are vital components but Phillips’s numbers are stark: Leeds have lost three quarters of the Premier League games he has missed, as opposed to 32 per cent when he plays.

His defensive role in north London looked a good tactic to return to – not every game, but on other occasions when opponents lined up with a so-called “false nine”, a centre-forward who is not a targetman but naturally drifts deep.

More often than not, Manchester City play with one, be it Jack Grealish, Phil Foden, Kevin de Bruyne, Raheem Sterling, Bernardo Silva or any number of others at their happiest in the space between the opposition midfield and defence. Leeds are there on Tuesday.

Chelsea may or may not play with one today. Their strongest XI features a very genuine No 9 in Romelu Lukaku but the Belgian has been eased back very carefully from an ankle injury, making his first start in 11 games against Zenit St Petersburg on Wednesday. If two in a week is asking too much, Kai Havertz or Timo Werner will fill in.

“They’re all centre-forwards with different characteristics but we’re not going to plan the game differently depending who’s playing.”

Havertz and Werner will lead the line in a far less orthodox fashion than Lukaku, but Bielsa is absolutely right on one thing: his planning for every game always builds in plenty of flexibility and that will offer the solutions to Phillips’s absence.

Where many managers aim to have at least two squad players for every position, one of many Bielsa paradoxes is he likes to limit himself to only 18 seniors, yet ask him who can fill Phillips’s boots and there are options aplenty.

“(Adam) Forshaw has played as a defensive midfielder before and he’s done it well,” he points out.

“Forshaw has been a presence that has given fortitude to the team, Pascal also in that position. I also think Robin Koch can be an excellent defensive midfielder.

“In that sense I try to develop what these players can contribute.”

Koch is due back in training this weekend after injury, then illness.

“He can play as a centre-back, as a defensive midfielder,” said Bielsa, who used Koch in Phillips’s place in his only appearance so far this season, at Manchester United on the opening weekend. “He’s been out for a long time. We think he needs competition (competitive football matches) but if we need him quicker we would analyse the possibility of calling him up. The ideal thing would be that he gets the competitive rhythm in under-23 games and but sometimes in situations that impede the ideal you do what’s necessary.”

The same adaptability is required in other areas of the field, too.

“(Joe) Gelhardt has given options in that (attacking) position, (Charlie) Cresswell when he’s had to play (at centre-back) has also given positive responses,” argues Bielsa.

“Tyler (Roberts) is evolving in the centre of the attack. He’s improving. I think he can show a lot of his virtues and at the same time there’s a lot of things he can do which he hasn’t made visible yet. (Mateusz) Klich is also an option as an offensive midfielder.

“I always work so the difficulties harm us as little as possible and in this case it’s the same.”

Dropped to third by last week’s defeat at West Ham United and criticised by manager Thomas Tuchel for their midweek Champions League draw, a Chelsea squad with more injuries than Leeds (but more depth to cope with them too) is showing signs of not being at its imperious best.

“The performance on Wednesday was with a mixed squad that doesn’t represent the true strength and the game against West Ham which was a defeat, you have to watch it and analyse it to see if the result coincides with what was deserved,” cautions Bielsa. “I don’t see a lowering in their play.

“To confirm what I’m saying with respect to Wednesday’s game you have to look at the XI and with regards to the game against West Ham there’s sufficient data to see if I’m correct or not.”