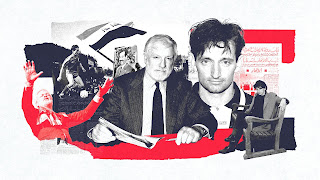 Let’s just get it out of the way at the start. Pat Nevin is a rare breed: a Chelsea player it’s okay to like. He stood up for his Chelsea teammates when they were being racially abused by their own fans, has a healthy perspective on football’s place in life, and wrote a column for the NME while looking like Johnny Marr’s kid brother. Oh, and he could piss off Ken Bates like few other footballers. Put down your father’s gun, this one gets a pass.

Nevin recounts a few tales about Bates that will resonate with Leeds fans in his autobiography, The Accidental Footballer. As ever, Gwyn Williams is always lurking close by, and their first meeting set the tone for their working relationship. As the title his the book suggests, Nevin never intended to be a professional footballer. Despite agreeing to join Chelsea, he travelled from Glasgow to London still unsure if he’d be better off staying in Scotland to fulfil his university studies and continue playing semi-professionally. After leaving his girlfriend Alice on the platform, he spent the train journey, ‘thinking of sadness and heartbreak of leaving someone I cared about, with little or no room for anything else’.

It sounds quite easy to get along well with Nevin — treat people respectfully and keep your word and you should be fine. Gwyn Williams fell at the first hurdle. In negotiations for the move, one of Nevin’s few requests was that he lived on his own in a flat rented by the club rather than being put up with a family in digs. He’d already travelled around Europe and lived the bohemian student life, and hated the thought of being treated like a child. Chelsea agreed, and Williams met Nevin on the platform of Euston Station. “Right sonny,” he told his new signing, “let’s get you to your digs out of town, we have a nice family who will be taking care of you.” Williams made the mistake of laughing at Nevin’s insistence the club were meant to have sorted a flat, prompting Nevin to walk back up the platform, ready to return to Glasgow and the life he was more than happy to rejoin. “I’ll be back when you as a club are willing to fulfil your promises.” Williams relented, but Nevin, who had taken the club at their word, learned his first lesson of negotiating with Bates. The club-rented flat wasn’t included in the written contract, so he paid out of his own pocket.

Let’s fast forward almost thirty years and out of Nevin’s book, to Leeds, where Bates was refusing to sanction Simon Grayson’s signing of Alexandre Mendy, after already making the trialist pay his own expenses while training at Leeds. The same summer Bates waved goodbye to Bradley Johnson, refusing to pay the midfielder the going rate for Leeds’ Championship squad despite signing worse players on better money. Speaking on an episode of The Square Ball Extra podcast, Johnson revealed Bates often rang him the night before a game, trying to negotiate a new deal without his agent in attendance. Johnson was never going to entertain the request, feeling like Bates was trying to bully him.

Back to Nevin, who never had an agent, and was ready and willing to play Bates at his own game. Named Player of the Year in Chelsea’s promotion season of 1983/84 and with his contract due to expire at the end of the following campaign, he asked for a wage he believed was the average among the rest of the squad, writing it down for the chairman on a sheet of A4 paper. Bates screwed the paper into a ball and threw it into a bin before walking out the door to his Rolls Royce.

Nevin was already stifling laughter at the ‘cod psychology’ of Bates sitting behind a huge desk in an elevated chair, trying to make him feel small. Bates had neglected to consider the lessons life taught Nevin while he was growing up in Glasgow’s East End. As soon as Bates left the room, Nevin rifled through his desk, finding a document detailing every player’s wage. His original estimate was correct. When he met Bates for round two the following day, he told the chairman, “I am only asking for the average for the team, so I am not being greedy considering I am the current Player of the Year.” Bates replied, “You can’t know what the average is,” and Nevin gleefully informed him, “Yes I can, I rifled through your drawers when you walked out yesterday and I found all the contracts.” Bates yielded, admiring Nevin’s chutzpah. Nevin pushed it one step further by requesting to leave a pre-season friendly at Brentford at half-time so he could see a New Order gig at the South Bank.

It speaks volumes about Bates’ personality that the way to earn his respect is to treat him as disrespectfully as he treats you. Grayson once told me Bates took a shine to him for being able to bite back at his “banter” (there are few more chilling thoughts than imagining Bates’ “banter”). But Bates’ tolerance does not equate to his loyalty. After being treated “like a son” by Bates and his wife Suzannah when things were going well, Grayson has not spoken to either of them since being sacked as Leeds manager, aside from a brief threat of legal action over comments made by Grayson and his assistant Glynn Snodin at a Leeds fans Q&A in 2013.

Nevin did get the chance to speak to Bates after his career at Chelsea had finished. There was one game still on his mind, and one question he needed to ask Bates. Chelsea had flown to a mid-season training camp in March 1986. Bates’ choice of destination was the Middle East, and he gave the players £6 a day in expenses, leaving them out of pocket on the trip. Ahead of one friendly, the kick-off was delayed for 45 minutes until the guest of honour arrived. Chelsea were playing the Iraq national team, and that guest of honour was Saddam Hussein. The question on Nevin’s mind is an example of what separates him from the vast majority of other footballers, and sums up how he dealt with Bates better than most of his peers.

‘Years later I asked Ken Bates what on earth that trip was all about. He didn’t give me a clear answer, so I tried again, ‘Was it to give you a chance to meet your old soulmate Saddam Hussein?’ His reply was unrepeatable.’