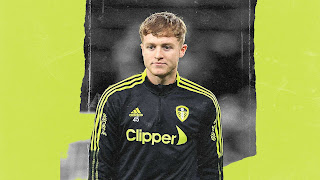 If Marcelo Bielsa fancies injecting some Gjanni Alioski Energy back into Leeds’ first team, he should look no further than Liam McCarron. McCarron is proof of Bielsa’s theory that modern full-backs and wingers are becoming indistinguishable. Given a senior debut with a cameo on the wing against Arsenal (making headlines in The Cumberland News!), McCarron reverted to the no.3 shirt in Leeds Under-23s’ 0-0 draw with Everton on Monday night, manically sprinting up and down the left flank like a shuttle bus between bylines.

Never afraid to bet on his pace getting him out of any defensive troubles he gets himself into when his instincts send him charging forward, McCarron was cashing out when he gave Everton’s right winger a ten-yard head start, chased to tackle him in Leeds’ half, then sped off back in the opposite direction, driving into Everton’s penalty area. His cross to the back post flashed across goal, but none of McCarron’s teammates matched his ambition to get in a dangerous position. It was at least the third occasion Leeds failed to meet a similar pass, and was reminiscent of Mateusz Klich’s cross against Arsenal evading Crysencio Summerville, whose one second of hesitation meant a potential chance passed him by. Injuries are making Leeds’ goalscoring issues chronic. In the absence of Patrick Bamford, the first team required Joffy Gelhardt for ninety minutes against Arsenal, meaning he was missing for the U23s, while his partner in crime Sam Greenwood was taken off at half-time after his own appearance off the bench for the grown-ups.

The chance was a snapshot of McCarron’s evening, spent feinting past defenders and testing his lung capacity. With twenty minutes left, he took off the tape around his ankles as if trying to ease the slightest bit of pressure on his muscles and keep cramp from slowing him down. His Alioski tribute extended as far as preventing an Everton counter with two drunken karate kick clearances, and a frighteningly blasé attitude when a dangerous spell of opposition pressure resulted in the ball landing at his feet in Leeds’ box. Most players would have urgently punted the ball upfield to safety, but McCarron stayed calm even while his attempted chip to a teammate was blocked by an Everton player. A sloppy touch as the ball ricocheted back to him could have given away possession again, but he carried on as if nothing had happened.

The 0-0 draw means the U23s haven’t won in the league in ten matches, and are yet to win at home in the competition this season. It was only their second clean sheet in fifteen games, courtesy of Dani van den Heuvel making a number of saves Kristoffer Klaesson has been making look difficult, including one in the first half that was almost Illan Meslier v John Lundstram chic. The kids are in tune with the first team’s blueprint to such an extent Jack Jenkins followed the man he was marking so closely he was eavesdropping on his touchline chat with Everton head coach David Unsworth while the game was paused. As part of a triple substitution at half-time, Nohan Kenneh replaced Kris Moore in what appeared a straight swap at centre-back, yet resulted in a reshuffle I thought only Stuart Dallas made possible. Kenneh was coming on as a defensive midfielder, Jenkins moving from defensive midfield to right-back, Harvey Sutcliffe from right-back to centre-back.

For all the disruption, it was comforting to be reminded the blueprint can still work after a shaky run of results for both the kids and adults. Everton were forced into putting eleven players behind the ball in the second half, counting on chances coming on the break. Occasionally they got them, but Everton couldn’t work out how to get past Van den Heuvel. Meanwhile, Leeds dominated the ball, passing and probing energetically, refusing to be disrupted by the half-time changes. Sean McGurk created a couple of chances for himself by twisting and turning from the wing. Max Dean started beating up the pitch after air kicking inside the box. As momentum threatened to dip in the final ten minutes, every single Leeds player seemed to be bollocking another to kick things into gear. Given academy football is often criticised for failing to produce leaders, it was encouraging to see Leeds’ players holding each other accountable.

Taking the positives from the last U23s fixture of a successful 2021, rather than lamenting missing a chance for a first win since October, head coach Mark Jackson told LUTV, “The lads want to win. They come in and they haven’t won so they can be a little bit dejected. I tried to pick them up quickly and say there were a hell of a lot of positives from the game today. We’ll look at them and take them forward into the New Year.”

Without a fixture for two weeks, some members of the U23s might be looking forward to some rest over Christmas and New Year. McCarron is among the players unlikely to be afforded such a luxury. Given the injuries in the first team and the Premier League’s insistence that games should be played, the dense fog shrouding the Arsenal defeat may be replaced by McCarron’s Road Runner blur kicking up a cloud of dust down the left touchline.