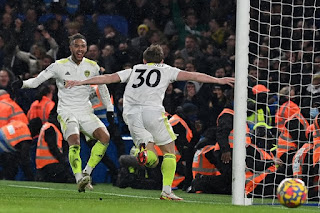 The Italy midfielder played through the pain of a continued back issue to ease the Blues’ midfield injury problems, with N’Golo Kante and Mateo Kovacic sidelined.

Jorginho duly buried his 14th and 15th Premier League spot-kicks for Chelsea, to steer his side two points behind leaders Manchester City.

Raphinha converted his own penalty to send Leeds into an early lead in west London, only to concede a spot-kick at the other end when scything down Toni Rudiger.

Germany defender Rudiger then won Chelsea’s second penalty at the death to boot, when fouled by Mateusz Klich.

Leeds thought they had scrambled a point as teenage forward Joe Gelhardt climbed off the bench to send the Whites level at 2-2 in the closing minutes.

But Chelsea were determined not to wind up without a win for the fourth time in their last six top-flight outings.

And while Leeds were desperately trying to tiptoe away with the draw, Rudiger piled into the box and forced another penalty.

Jorginho just about remains the world’s surest best from the spot, and the former Napoli player made no mistake to secure all three points for the Blues.

Boss Thomas Tuchel had demanded Chelsea stopped sitting on leads after a patchy run in the Premier League of late, but again the Blues failed to take control for large swathes of this tetchy encounter.

Jorginho’s rescue act might just breathe the kind of renewed confidence and spirit to send the Blues into the rest of a hectic December in top spirits however.

Chelsea struggled for fluency in a staccato first half, only saving themselves in the closing stages to turn around level at the break.

Marcos Alonso upended Dan James to hand Leeds the ideal chance to open the scoring from the spot, and Raphinha made no mistake with his calm effort.

Chelsea continued to claw away at urgency and efficiency, only to equalise from a moment of pure opportunism.

Alonso robbed a flat-footed Stuart Dallas who failed to control Illan Meslier’s pass, before sending a low ball to the near post.

Mount peeled off the defensive cover and swept into the net to level the clash, with the Blues mightily relieved to be on terms at the interval.

Chelsea returned far more measured and calm on the ball after the break, eventually stealing into the lead from a penalty of their own.

Raphinha scythed through Rudiger in the box and the spot-kick was duly awarded after a VAR review.

Jorginho stepped up and tapped into the top corner, keeping his head to hand Chelsea control.

The hosts failed to build on that advantage however, once again easing off the throttle when finally in charge.

Just when the hosts thought they could grind out a vital win, replacement striker Gelhardt steamed in and buried a cross.

Chelsea refused to roll over though, and Jorginho finally secured the victory, converting again from the spot.

Klich tussled with Rudiger and was censored for the challenge, and as per usual Jorginho did the rest from 12 yards.