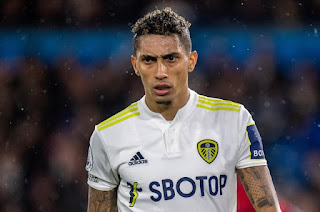 Raphinha says Leeds United still have time on their side.

The Whites have seen Premier League relegation fears grow in recent months amid the backdrop of an injury crisis at Elland Road.

Marcelo Bielsa's side have picked up just 16 points from 18 games, a tally which sees Leeds sit five points ahead of Sunday's opponents Burnley who currently head up the top flight drop zone.

United were beaten 4-1 by Arsenal last time out ahead of an enforced hiatus from match action over Christmas owing to a small Covid outbreak in LS11.

Boxing Day's visit to Anfield to face Liverpool fell foul to a rearrangement as did last night's originally scheduled hosting of Aston Villa in West Yorkshire with Bielsa unable to field a competitive line-up.

Leeds will return to the pitch against the Clarets this weekend in the hope that the brief stoppage can help towards rejuvenating their campaign heading into the new year.

Bielsa saw 10 senior players miss out against the Gunners which has shifted the burden onto the more experienced players that have been left to battle on.

Raphinha - who has eight goals and one assist in 16 matches this term - has been one of those to emerge as an on-pitch leader in troubled times.

"I don't think we have played bad football," Raphinha said recently of United's season so far.

There was only ever going to be one winner 🏆 #lufc https://t.co/ste1gpvOpz

"I think we have had a lot of bad luck and been unable to finish off games. That's football. But that's the most important thing, winning games.

"Even if you are playing well but don't win, you're not picking up the points. I think whether you play well or didn't play well, the most important is getting that win - winning games to put the points on the table to get out of the situation that we find ourselves in.

"Of course, we look at the situation and the low position in the table and we are concerned about not getting the results we deserve. But we know there are a lot of games ahead of us to turn the situation around."

The 25-year-old Brazilian was voted the Yorkshire Evening Post Player of the Year for 2021.

His quick adaptation to English football has seen a growing list of admirers emerge around Europe, which is no surprise after a quick glance at his stats.

Raphinha has played 46 Premier League games for Leeds so far since his arrival around 18 months ago, scoring a total of 14 goals and notching nine assists.

"I have always said the ones who have helped me the most are my teammates, the coaching staff and the manager," he said of his quick adaptation to the top flight.

"They were all really important. I needed a lot of help when I first arrived with the language and culture, particularly around football. When I arrived there was this belief that I needed help to adapt as soon as possible to be able to be decisive and contribute to games.