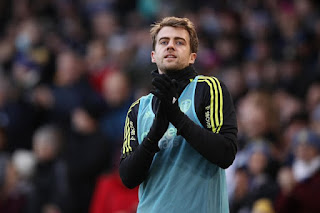 Patrick Bamford is closing in on a return to action for Leeds United.

The Whites striker has been limited to just six Premier League appearances this term due to injury but is hopeful of featuring this weekend against Burnley.

Last season's Elland Road top goalscorer made a stunning comeback from a lengthy layoff earlier this month, shaking off an ankle issue picked up in September to score a vital injury-time equaliser against Brentford from the bench.

However, a hamstring problem picked up against the Bees amid the wild celebrations has sidelined United's No 9 ever since.

Bamford, though, is stepping up his return to training in the next few days and has his fingers firmly crossed that he could feature against the Clarets on Sunday afternoon.

"The injury is coming along good," Bamford told the Yorkshire Evening Post.

"I think it was almost a blessing in disguise that the two games over Christmas got postponed, but yeah, it's coming along nicely. I should be doing drills tomorrow [Thursday] and then we'll see how close we are.

Raising money for @andysmanclubuk , @EcoSchools and the @LufcFoundation . Match worn centenary shirt and Leeds number plate up for grabs 🙌🏽https://t.co/FRWhMM3X1l

"It's touch and go for Burnley. I'm feeling good. I've hit every marker that's been laid down so far day to day, so it's been a good improvement. It's not a few weeks away. It's very close."

United's hosting of Burnley in LS11 will see Marcelo Bielsa's men take to the pitch for the first time since December 16.

Boxing Day's trip to Anfield to face Liverpool fell foul to a rearrangement due to a small Covid outbreak at Thorp Arch with the following visit of Aston Villa to West Yorkshire also called off.

Bamford's return would provide a huge boost to Bielsa's ranks should he be declared fit after no less than 10 senior players missed the clash against the Gunners through injury, Covid and suspension.

"What the club has gone through is unheard of really. You don't ever see that many injuries, especially in one go," Bamford continued.

"Maybe throughout the season you'd get them spread out but they have seemed to hit us all at once. It's just been unfortunate, we have really been down to the bare bones.

"It'll be nice when we come back to have a full team. This season everyone is saying Leeds are struggling but I don't think we've had a full 11 for two games in a row.

"So there's not been that consistency compared to last year. We will have that before the end of the season.

"It's not like we're right at the bottom of the league and propping it up. We're still doing okay. It's just compared to last year and what everyone expects, we're a little below that.

"I think when everyone comes back we'll be confident. I know how hard the boys and the staff work, things will start looking a little better soon."
Patrick Bamford