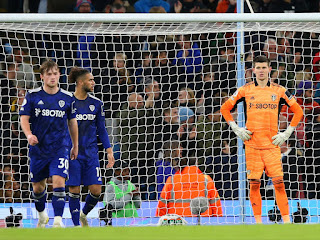 For better or worse, playing Marcelo Bielsa’s side is a unique proposition and that will not change any time soon

What do you learn by beating Leeds? You did not need to be at the Etihad witnessing Manchester City’s spectacular seven-goal evisceration first-hand to know that the Premier League leaders and reigning champions are simply a lot better than Marcelo Bielsa’s side. We all knew that already.

Kevin De Bruyne did not need to score twice on his return to a league starting line-up for the first time in a month, as if to remind us that he is still one of the very best players in the country. Even during a difficult calendar year and stop-start season so far by his standards, that has never been in doubt.

And the fact that City’s other five goals came from five different goalscorers was not much of a surprise either. Given the space that Bielsa’s style of man-to-man marking and high-intensity pressing provides opponents, another battering away to one of the best teams in Europe always appeared likely. We have been here before this season, after all, on the other side of this city.

Back on the opening weekend, Manchester United were also in a rampant mood while hitting five past poor Leeds. With Raphael Varane unveiled on the Old Trafford pitch in August sunshine, that emphatic victory was taken as a sign of a promising campaign ahead and perhaps even the harbinger of a serious title challenge under Ole Gunnar Solskjaer. As you may have realised, it wasn’t.

Of course, City can be slightly more confident that this 7-0 hammering is an accurate reflection of their title credentials, which are in absolutely no doubt. And even if their emphatic victory was no surprise, it was not absolutely inevitable either. Though ravaged by injury, Leeds came within minutes of taking a point at Stamford Bridge just a few days ago. Last season, City failed to beat Bielsa’s side home and away.

In the build-up to the game, Guardiola repeatedly referred to how Leeds had taken “five points” off City last term – even once he had been told that was impossible, and it was actually four. It was as if he was applying the extra point as a mark of respect. It is not unusual for Guardiola to speak highly of inferior opponents – he does it so often it can seem insincere – but with Leeds and Bielsa, it is genuine.

Stuart Dallas’s stoppage-time winner back in April proved that nothing could be taken for granted, but that late-season win over a rotated City who were already well on their way to the title increasingly looks like an anomaly. Leeds’ victory at the Etihad was the only time that they avoided defeat away to one of the “big six” clubs last season. The other five games were lost by an aggregate score of 20-8. And that was when things were going well.

As the halfway point of this difficult second season approaches, Leeds have already played four of that big six away. All four have ended in defeat and that aggregate scoreline already stands at 17-4. “Leeds (H)” might not be a guaranteed three points for any Premier League club that expects to finish towards the top of the table but it is not far off.

And as opponents, they are unique. “We play just two times a year and we have to adjust a few things,” Guardiola admitted while previewing the game. “Completely different to the others.” Even for the greatest tactical mind of his generation, there is no plan that can be borrowed from a previous game against different opposition, no action points to take forward into the next fixture.

Even Guardiola’s fulsome praise of De Bruyne’s performance had a small caveat. The conditions of the game – wide open spaces and fast counter-attacking – had undoubtedly helped. “This type of game is a bit more open and in any transitions Kevin is the best. Sometimes he struggles a little bit when the team sits tight, like Wolves, but we need him – what he has done for me is everything.”

How much, then, can any team learn from beating Leeds? And, on the opposite side of the coin, what do Leeds learn by getting beaten? If this is like either of their other two thrashings in Manchester over the past year, then many will ask once again whether they could have compromise slightly on those tactical principles. Why not play a more conservative style, Marcelo, in the hope of at least keeping the score down or even coming away with a result?

Anyone still taking that line of questioning would be better off parking up outside Elland Road one day this week and asking the statue of Billy Bremner. There may be tweaks in the shape and changes in personnel but if the past three-and-a-half seasons has taught us one thing, it is that the fundamentals of Bielsa’s philosophy are non-negotiable. El Loco is not for turning.

Bielsa’s wager is a simple one: by refusing to compromise on an uncompromising style, Leeds operate at the extremes, winning more games than they would otherwise win, even if that also means losing more games along the way too. Last season, they drew only five times, the joint-second fewest in the top flight. This season, they have already drawn seven games. Only Brighton and Burnley have shared the points more often.

And when the wins dry up, there is inevitably greater scrutiny on his tactical approach after the heavier defeats. Bielsa described Leeds’ performance at the Etihad as the worst during his spell in charge. “The sensation that the game wasn’t going to change was from the start until it ended,” he said. He felt powerless to affect proceedings from his vantage point atop that blue bucket. But really, what would he have done differently?

This was Bielsaball as it always has been, with all the tight marking, positional rotation and wide open spaces that elite opponents are primed to exploit. To paraphrase Barry Davies’s infamous admonishment of Italy at the 2002 World Cup, Leeds lost because they will not learn. But do they need to when their manager is dogmatically loyal to his unique style of play, confident that his wager will eventually pay off in the way it did last year?

Bielsa will not waver or change his methods. And even before this, the joint-heaviest defeat in this proud club’s 102-year history, we already knew that.