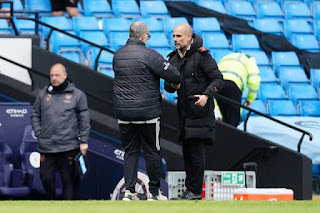 Last season the Whites held Guardiola's men 1-1 at Elland Road and somehow beat the then champions elect 2-1 away from home, despite going down to 10 men when Liam Cooper was given a first half red card.

Guardiola expects similar difficulties this season from Leeds and ahead of their Etihad meeting tomorrow night, the Spaniard explained what makes a game against Bielsa's side so challenging.

"Leeds is one of our toughest opponents," he said.

"Especially because they play every week with this special, unique way and we play against this special, unique way just two times a year. We have to adjust a few things because it's completely different from other opponents. In the end you are going to play the way they play, we are not used much for our qualities to play in these types of games. It's a challenge, we know a lot of people will be watching us and we want to continue doing a good game."

Leeds' second season in the top flight appears to be proving more difficult than when they first returned after 16 years in the EFL. Bielsa has been unable to get the same free-flowing football from his men on as regular a basis, goals have been harder to come by and injuries have deprived him of key players all too often.

Guardiola doesn't believe there's a 'second season syndrome' at play and still sees an opponent who will create danger - as they did at Chelsea on Saturday before suffering defeat in stoppage time. He believes Bielsa relishes adversity and so Manchester City must prepare for another uniquely difficult test.

"I don’t think Leeds have dropped their standards," he said.

"Of course Bamford has been injured for a long time now, Phillips and a few important players, but if there's one person who never complains it's Marcelo. He loves to work when situations are tough. You see the stats, you see the style, there's no single game they don't create I would say more chances than the opponent and for a moment are better than the opponent. We know we have to suffer and to adapt and to impose what we want to do."