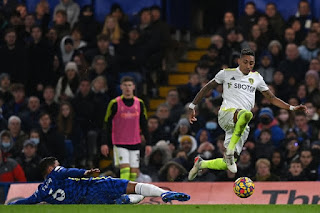 Leeds United legend Eddie Gray believes Raphinha could play for any team in the Premier League - but is loving seeing the Brazilian strut his stuff for the Whites.

Leeds signed Raphinha from French outfit Rennes for £17m in October 2020 and the winger is now a Brazilian international and a regular starter for both club and country.

The 24-year-old bagged six goals and nine assists in his first Premier League season at Leeds and already has seven goals and one assist for the 2021-22 campaign.

Back in the 60s and 70s, Gray was United's star winger for Don Revie's all conquering Whites and United legend Gray is a huge fan of Raphinha's talents.

"The boy is a top player," Gray told the YEP, assessing the winger's standing in all time Leeds stars.

"The only thing I would say is that it is always difficult to compare players from different eras but what I would say is, I don't think he would look out of place in any team in the Premier League so that's all you can say at the present time.

"If he played for any team in the Premier League, he would look good.

"It's difficult to compare players from the past and the present but at the present time, he is good enough to play in any side."

Pressed on whether Raphinha might be the most skilful Leeds player since himself, Gray pondered: "I don't even think of things like that!

"All I know is that he could play in any side.

"I enjoy watching him and he is a vital component to our side, that's the thing about it and I think everybody at the club will know that.

"If he's on song or he gets the ball in certain areas, even when you are not playing well, he is always capable of doing something and turning the game as he has done many times, even this season."