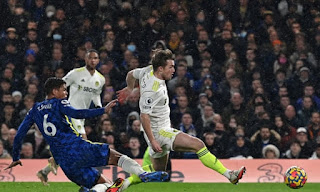 Chelsea have forgotten how to defend, but they still know how to fight. Their title challenge was in danger of unravelling when Joe Gelhardt equalised for Leeds United with seven minutes left and while Thomas Tuchel will be concerned about another careless performance, he can take satisfaction from the defiance his team produced when it seemed that another win had slipped from their grasp.

This victory owed more to character than quality. Unlike Marcelo Bielsa’s bold but naive side, Chelsea had a streetwise edge. The European champions kept going and their reward arrived when Antonio Rüdiger, a dynamic presence who is never far away from controversy, tumbled in the area when the Leeds substitute, Mateusz Klich, tried to take the ball away from the Chelsea centre-back in added time.

There was no need for Klich to be so rash. Rüdiger, who had already won one penalty, had his back to goal when the Leeds defender kicked through him and although there was a brief delay as VAR checked Chris Kavanagh’s decision to point to the spot, there would be no reprieve for Bielsa’s side and Jorginho stepped up to seal a lucky win by tucking away his second penalty of the afternoon.

“He did not accept to lose,” Tuchel said of Rüdiger, who was later involved in a mass brawl after the final whistle. For Leeds, who lie 15th, there was merely a sense of burning injustice. They had contributed so much, although there were times when both sides allowed emotion to get the better of them. Marcos Alonso and Mason Mount both had spiky exchanges with the Leeds fans, while the Football Association could investigate after Chelsea’s captain, César Azpilicueta, appeared to direct an obscene gesture at a raucous away end. “I didn’t see any of this,” Tuchel said. “I was fully focused on the match.”

In Tuchel’s defence, it was hard to take your eyes off the pitch. Chelsea, their confidence low after uneven displays against Zenit St Petersburg and West Ham, were vulnerable throughout. Once again their sheen of defensive invincibility was nowhere to be seen. They never looked comfortable and have let a lead slip five times in their last three games, conceding eight goals in the process.

All the same this could be a crucial win for Chelsea, who are still in touch with Manchester City and Liverpool at the top of the Premier League. “I was confident that we can turn things around,” Tuchel said. “We played a little bit with the fear that we had something to lose. It always is a bit of luck. Maybe it is our turn. We needed this win desperately for the mood, for the belief, for the atmosphere.”

Chelsea would not have it all their own way. Typically adventurous, Leeds did not hesitate to attack. There were openings for Jack Harrison and Raphinha, who saw a free-kick pushed away by Édouard Mendy, and Tuchel must have been concerned at how easily the visitors played through his midfield, where the absence of N’Golo Kanté and Mateo Kovacic left Chelsea short of balance.

Ruben Loftus-Cheek was a ponderous presence and Jorginho, who was playing through hip and back pain, found the pace difficult. Leeds had too much room and it did not come as a surprise when they went ahead in the 28th minute, Raphinha planting a penalty past Mendy after a skittish challenge from Alonso on Daniel James, who was deputising for Patrick Bamford.

Those two had previous: Alonso, who has struggled at left wing-back in Ben Chilwell’s absence, gave away a penalty by fouling James when the winger was playing for Manchester United in October 2019. Chelsea grew nervy after falling behind. The moves felt forced, with Timo Werner a blunt instrument on the left, and it was hard to see where a goal was coming from as half-time approached.

With tempers rising, however, Chelsea profited by increasing the intensity of their press. After 42 minutes Alonso made amends by robbing Stuart Dallas. An exchange of passes with Werner took Alonso to the byline and when the Spaniard cut the ball back, Mount clipped a low finish past Illan Meslier.

Now the momentum belonged to Chelsea. The disappointing Kai Havertz was denied by Meslier. Leeds, who were without Liam Cooper and Kalvin Phillips, fell back and the pressure told when Rüdiger, such a driving force for Chelsea with his runs from the back, was fouled by Raphinha, whose scissor challenge was penalised by VAR.

Up stepped Jorginho, coolly beating Meslier, but Chelsea could not relax. Leeds levelled brilliantly, Klich releasing Tyler Roberts to cross for Gelhardt to score with his first touch.

At that stage Chelsea, who responded by throwing on Romelu Lukaku, looked directionless. Somehow they found a second wind. Thankfully for Tuchel, there was not enough time left for Chelsea to throw another lead away once Jorginho had made it 3-2.