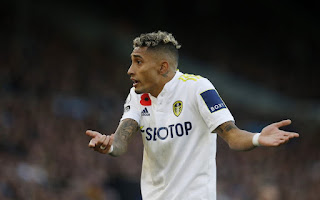 Leeds United’s playing squad are worried about their recent poor run of results.

That’s according to winger Raphinha, who does however, insist he is confident that the club can turn things around this season.

After an excellent return to the Premier League last season, things have gone nowhere near as well for Leeds this time around.

The Whites have taken just 16 points from their 18 league games so far, leaving them 16th in the Premier League table, five points clear of the relegation zone.

Last week saw Marcelo Bielsa’s side heavily beaten 7-0 and 4-1 by Manchester City respectively, and it seems those results are playing on the mind of Raphinha and co. although there is a belief that things can still change for the better.

Speaking about the view he and his teammates have on the situation they find themselves in, the Brazilian told The Mirror: “Of course we look at the situation and the low position in the table and we are concerned about not getting the results we deserve. But we know there are a lot of games ahead of us to turn the situation around.”

Indeed, it seems Raphinha believes Leeds have a chance of turning things around if they keep doing what they are doing, as he added: “I don’t think we have played bad football. I think we have had a lot of bad luck and been unable to finish off games. That’s football.

“The most important thing is winning games and if you play well, but don’t win, you’re not picking up the three points.

“The most important thing is getting those wins to put points on the table to get out of the situation we find ourselves in.”

It may be a concern for those of a Leeds persuasion to hear this admission from Raphinha.

The Brazilian has been a stand out figure for the club ever since his arrival, and you feel as though he will be key for the club if they are to get out of trouble this season.

As a result, the fact he is worried may be a problem, given other clubs are inevitably going to be interested in him, and may see these comments as a chance to make their move to try and tempt him to head elsewhere.

With that in mind, with the January transfer window on the horizon, we could be heading for a nervy few weeks for Leeds, both on and off the pitch.