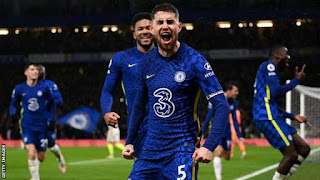 Jorginho scored his second penalty after 94 minutes to decide a hugely entertaining encounter at Stamford Bridge, which featured three converted spot-kicks in all, to keep his side within two points of leaders Manchester City.

Teenage substitute Joe Gelhardt appeared to have earned a late point for Leeds with his first touch, the 19-year-old sliding in to send Tyler Roberts' low cross past Edouard Mendy with seven minutes remaining.

Raphinha put the visitors ahead with the game's first penalty after 28 minutes, following Marcos Alonso's mistimed challenge on Daniel James, but Mason Mount met Alonso's pass with a first-time finish to restore parity before the interval.

Despite Gelhardt's heroics, it was Jorginho who had the final say with another confident penalty after Mateusz Klich brought down Rudiger to keep third-placed Chelsea firmly in the title picture.

Such is the unforgiving nature of this season's title race, defeat by West Ham was enough to cost Chelsea two places as they continue to wrestle with Manchester City and Liverpool in an already enthralling battle at the top.

With seven minutes remaining, it appeared the European champions would lose further ground at the beginning of a relentless Christmas schedule, yet despite letting another lead slip they remain within striking distance with this hard-fought win.

Tuchel admitted that, given the high standards expected at Stamford Bridge, his side's recent form of one win in four matches in all competitions has looked "kind of horrible" - adding his side had been "trying to escape with 90% effort and intensity" in recent matches.

After a promising start, in which Mason Mount went close and Reece James attempted to catch out goalkeeper Illan Meslier with a disguised free-kick, the Blues were initially unable to make their early superiority count against a depleted Leeds.

Wing-back James displayed his versatility as he was given permission to roam around a midfield missing Mateo Kovacic and N'Golo Kante, while another obvious positive for Tuchel was Mount's continued run of form in front of goal as the England midfielder scored for a third successive league game.

But it is at the back where Chelsea's concerns remain. They have conceded eight goals across their last three games following Wednesday's 3-3 Champions League draw with Zenit.

And while Alonso atoned for his penalty error by dispossessing Stuart Dallas to assist Mount, there is much work for Tuchel to do if his side are to sustain their title challenge.

"We needed this win desperately, for the belief, for the mood and for the atmosphere," added Tuchel, who insisted neither team's players overstepped the mark as tempers frayed after the final whistle.

"I'm very happy with how we got it, how we played. Now we have two days off and it creates a good feeling for the boys."

A ninth-placed finish backed up with impressive, high-octane football, helped Leeds earn many admirers on their long-awaited Premier League return last season, but Marcelo Bielsa's side were yet to ignite this term.

Despite the absence of captain Liam Cooper, midfield stalwart Kalvin Phillips and striker Patrick Bamford, the visitors hinted at a return to those levels as they made life rather uncomfortable for Chelsea after weathering early pressure.

Raphinha twice tried to beat Mendy from a wide free-kick - the first drawing a fine save from the Chelsea goalkeeper - before James' pace forced Alonso's hand in the Chelsea penalty area.

It is Raphinha who appears most crucial to Leeds' chances of success over the next few games, as an increasingly stretched squad takes on Manchester City, Arsenal and Liverpool in the next fortnight.

The Brazil international has now scored seven of his side's 17 goals this term - with those contributions worth seven points. No other team-mate has managed to score more than twice in the league.

Once again he appeared the most likely to deliver for the visitors but, in a dramatic twist, his replacement - England youth international Gelhardt - displayed great determination to beat Thiago Silva at the near post and score his first senior goal for the club.

However, Jorginho's second penalty after 94 minutes delivered a cruel blow to a Leeds side who remain six points above the relegation places in 15th.

"It was a game we deserved to draw and we lost it when it was finishing. That increases the disappointment," Bielsa told BBC Sport.