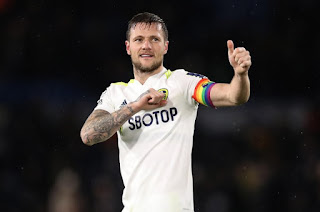 Liam Cooper may be captaining players half his age at Leeds United but the job is a simple one.

Substitute for the recent Arsenal game Archie Gray was born in March 2006, by which time a 14-year-old Cooper was already on the books at Hull City.

Gray, 15, is the most extreme case of the young blood in Marcelo Bielsa’s squad and a dressing room led by Cooper but the youthful element is sizeable.

Joe Gelhardt, 19, has made his senior breakthrough this season and already provided memorable moments for Whites supporters, winning a crucial penalty against Wolves and scoring a fine goal away at Chelsea.

He led the line from the start at home to Arsenal, racking up his sixth Premier League appearance, and earned another penalty when he drew ex-Whites loanee Ben White into a rash challenge.

Gelhardt is the most spoken about of Mark Jackson’s Under-23s at present but his fellow 19-year-olds Charlie Cresswell, Sam Greenwood and Stuart McKinstry have all seen Premier League action, as have 20-year-olds Cody Drameh and Liam McCarron.

Cresswell has an obvious gift for leadership that has already been lauded by Cooper and looks a serious prospect as he follows in Pascal Struijk’s footsteps in making a solid start to life as a centre-half in the big league.

Bielsa’s contentment to rely on the 23s to bolster his senior squad, even when injuries are not ravaging his options, is enough to make Cooper, just 30 himself, feel old.

He finds himself surrounded by, playing alongside and leading young men of a completely different era to his own, with a culture of their own.

The way he sees it, however, his role isn’t complicated when it comes to the new guard.

“You’ve just got to fill them with confidence,” he told The Yorkshire Evening Post.

“They’re training with us for a reason and that reason is they’ve been shining and showing how good they are. Everyone knows if you’re good enough to come and train with us and you keep improving, keep taking on what you’ve been coached, you’ll be given a chance in the first team.”

Reassuring them that they’re good enough to belong is only half of Cooper’s message to the Leeds kids.

The other half is advice that comes through his own lived experience and a career that was advanced in years before Bielsa entered it.

If Gray, Gelhardt & Co heed their captain’s wisdom, then everyone will benefit.

“The manager’s been unbelievable for the young boys,” he said.

“I always say it, I wish I’d come across him earlier in my career but it wasn’t meant to be. The young lads have really got to grasp it - they’re playing under an elite manager, at an elite club with an elite mentality.

“That will only better them, us, the academy and everyone around the place.”