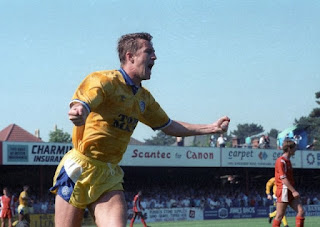 ON A SCORCHING day on the south coast a quarter of a century ago today, Leeds United created history - and infamy in certain quarters - after ending their eight-year absence from the top-flight.

Mention the word Bournemouth to United supporters and while some would instantly recount the current Whites crop completing the double over the Championship winners in 2014-15, most seasoned followers will think of THAT spring day in May 5 1990.

Not entirely for all the right reasons, with serious violence marring which should have been a wholly proud day in the club’s history.

It was a day when a Lee Chapman booked a return to Division One for Howard Wilkinson’s Whites, but that 1-0 victory at Dean Court was hardly the only talking point.

Thousands upon thousands of Leeds fans headed to Dorset during that infamous Bank Holiday weekend.

It was the culmination of an intense race for automatic promotion involving Leeds and their Yorkshire rivals Sheffield United and north-easterners Newcastle United.

Destiny was in Leeds’s hands, with a win ensuring the title and promotion, but a slip-up could potentially let in the Blades, making the trip to Filbert Street or Newcastle, who had a derby appointment at Ayresome Park against Middlesbrough.

Boro themselves were in need of a result for different reasons, to clinch their second-tier safety, with United’s opponents Bournemouth beating to avoid the drop with the Teessiders.

Ahead of the game in Bournemouth, an estimated 5,000 Leeds fans basking in sweltering temperatures were present in T-shirts and shorts, with thousands watching the action unfold back in West Yorkshire on a TV beam-back.

Venues included Roundhay’s Astoria Ballroom, the Colosseum on Cookridge Street, Leeds University’s Refectory, and Armley Sports Centre, while others had a closer ring-side seat to the action.

Serious trouble the night before with police added to the tinder-box conditions and environment with pre-match clashes involving Leeds fans increasing the tensions and receiving unwelcome national news headlines.

Scores of Leeds fans were positioned around the ground with an official allocation of 1,700 in the away end.

The stakes were high on the pitch and a tense encounter ensued before the definitive moment arrived shortly before 4pm.

A cross from Sky Sports presenter Chris Kamara was headed past Cherries keeper Gerry Peyton by Chapman, with Leeds then negotiating the final 41 minutes before referee Roger Gifford blew the final whistle, with hordes of ecstatic United fans invading the pitch to celebrate.

The United players briefly saluted supporters before retreating to the dressing room to toast their title success with the obligatory champagne while the Leeds multitudes enjoyed a mass party to hail their side returning to the big time.

Summing up the sense of relief following a long and strength-sapping season, skipper Gordon Strachan said: “Having so many games to get through takes a heavy toll both mentally and physically.

“I have picked up twelve or thirteen medals in my career but I can honestly say that none have been harder to win than this Division Two medal.”

But on the subject of those supporters who tarnished the name of the club with their actions on the south coast, Strachan was also unequivocal.

The Scot said: “We, the players, want to make one thing clear. The lads at Elland Road have won this championship not for the troublemakers but for the genuine, well-behaved supporters who have backed us in the right manner.

“Unfortunately, there are a few hundred morons – and that is what they are, morons – who tarnish the name of the club with their actions.

“If those people think the championship is theirs, then they should think again. And they can call me what they like for that.”