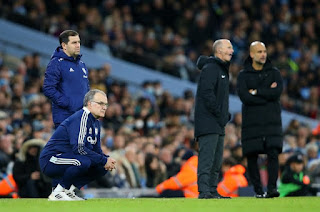 Marcelo Bielsa watched his Leeds United team put in their worst performance in four years and felt powerless to change it as they lost 7-0 to Manchester City.

The Argentine' s analysis of the beating sustained by his side at the Etihad was bleak. It wasn't, he suggested, a case of Pep Guardiola's team playing any differently to how they can, but a case of Leeds being unable to make anything work.

The sinking feeling set in early and never shifted.

"The image that we gave, we couldn't come back from it," said Bielsa after Phil Foden, Jack Grealish, Riyad Mahrez, John Stones, Nathan Ake and Kevin Bruyne (2) scored in the rout.

"The sensation that the game wasn't going to change was from the start until it ended.

"The problems were all the levels, all the solutions we implemented were insufficient. It's not that City played very well, it's a lot more noticeable how badly we played than how well City played. City plays like this all the time or similar to it. But we have never played so badly in these four years. I insist that the message the game leaves is what I proposed was not good enough. You can deflect the attention when some things work and some things don't. But when nothing works out, the decisions of the one in conduction defines what happens. I say it like this, as clear as possible. This is not a problem of individuals or the collective, nothing worked. We didn't find any surprises in the game, the team we faced was the team was expected to face and the ideas, the solutions I organised for the game, none of it worked. I have to understand that the responsibility lies with me, absolutely."

He was incredibly downbeat in his post-game press conference and did not attempt to draw any positives or sugar coat the evening's events.

"This is the worst performance in the four years," he said.

"In no moment of the game were we able to balance it. The sensation we gave was that anything they attempted we couldn't prevent and anything we attempted wasn't going to prosper further than the middle of the pitch. You will have seen that in our half nothing happened and in our half everything happened.

"I don't want to make references to any individuals. Everything I had to say about our performance I've already said it. Nor am I going to analyse the behaviour or prospects of anyone."

What Leeds will do now, ahead of another tough game at home to Arsenal on Saturday when Junior Firpo [suspension] will join the growing ranks of unavailable seniors, is talk about what happened and 'try to understand' according to Bielsa.