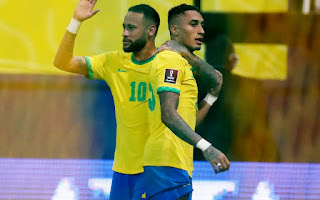 Raphinha has once again been linked with a move away from Leeds United in 2022.

Leeds’ Brazilian ace was said to be on Bayern Munich’s wish list heading into January – a rumour that has since been put to bed by the Yorkshire Evening Post.

Still, though, speculation surrounds the future of the 25-year-old, with Chelsea also linked in recent days.

Heading into January, there’s no chance Leeds can afford to sell the scorer of eight goals so far this season and the only attacking player playing to his full potential. It would be a case of the club making Marcelo Bielsa’s task of keeping Leeds in the Premier League much more difficult.

Beyond this season there are decisions to make, though, with interest in Raphinha refusing to go away.

A move in a summer transfer window would make a lot of sense: Leeds would get a better price and give themselves a stronger chance of replacing Raphinha.

The decision that’s made in the summer of 2022 will, of course, rest on Leeds’ Premier League status, but there’s a case to argue that the club are better off waiting to cash-in on Raphinha until after the World Cup in Qatar if they can.

Raphinha will eventually push for a move, with it unlikely that Leeds can match his Champions League ambitions as the winger motors towards his peak years.

Leeds, then, just need to read the market and decide when is the best time to sell.

International tournaments often trigger a weird market (think James Rodriguez after the 2014 World Cup) and Raphinha is well placed to be a star in Qatar. He’s scored two goals and registered two assists in only five appearances for Brazil, forming part of an exciting squad that could go deep in next winter’s tournament.

Combining that with impressive Premier League numbers and a reported new contract at Elland Road would leave Leeds licking their lips in another 12 months.

Selling this winter makes no sense at all, whilst the following summer will then ask more serious questions of Leeds. Playing the waiting game, though, might be in the club’s best interests.

Continuing on this trajectory and shining in a World Cup would leave Leeds sitting on a small fortune in 2023.