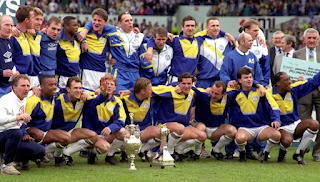 Strachan. McAllister. Batty. Speed. If you were tasked with building the archetypal midfield quartet from scratch, Leeds United’s 1992 midfield would be your model.

The 35-year-old savvy veteran and inspirational captain, slighted by his former mentor and with a point to prove.

The tough-as-nails young local lad who would put himself on the line for the cause.

The intrepid, spry and versatile left winger who came up through the youth academy.

You can’t live in Leeds for very long without becoming very familiar with those four names, always presented in that exact order, always rolling off the tongue as easily as you could name members of your own family, always spoken with the utmost reverence.

In 1990, Leeds won promotion back into the top flight in Howard Wilkinson’s first full season in charge after eight long and difficult years in the Second Division.

Gordon Strachan, signed from Manchester United and installed as captain, has consistently described that promotion season as the favourite year of his career.

He told the Daily Mail: “I know we won the main championship, but to win the Second Division was the most wonderful experience of my life.

“Every Saturday for home games, there was nothing like it. The crowd used to drag the ball into the net. I loved that group.” 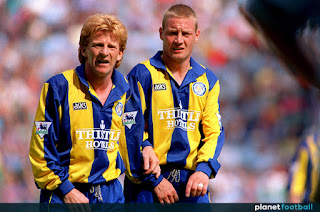 Strachan endured a torrid time in his last three years at Manchester United following his reunion with Alex Ferguson, but he played the finest football of his career at Elland Road, providing leadership to youngsters Gary Speed and David Batty alongside midfield partner Vinnie Jones.

Jones departed for Sheffield United following the subsequent promotion campaign, paving the way for another Scot, Gary McAllister, to join from Leicester City.

He proved to be the final piece of the puzzle for Wilkinson, a precision implement in comparison to Jones’ undoubtedly effective sledgehammer.

Leeds’ first season back in the top flight saw them finish a phenomenal fourth, an outstanding achievement in itself for a newly-promoted side.

But in the following campaign, all three of the sides that finished ahead of Leeds – Arsenal, Liverpool and Crystal Palace – struggled to carry their form over into the new season.

Fight for the title 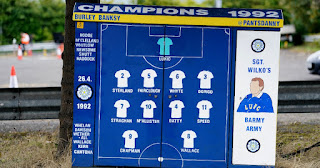 It left the door open for Manchester United to challenge for the title alongside Leeds, with Sheffield Wednesday and Manchester City keeping the pace well enough to keep things really interesting at the top.

Both Uniteds were in especially good form in the first half of the 42-game 1991-92 campaign: by Boxing Day both sides had lost just once each (Leeds to Palace, Man United to Wednesday), with Ferguson’s men holding a two-point advantage with two games in hand.

However, a poor start to the New Year for the Red Devils give Leeds the opportunity to make up ground on their great trans-Pennine rival – and they took it.

Lee Chapman’s hat-trick helped Leeds to a 6-1 win at Hillsborough on January 12 in a particular highlight for Leeds, even in a season where they scored three goals or more in 13 of their 42 games.

It could scarcely have been more perfect: a heavy win over title-challenging local rivals to go top of the table. 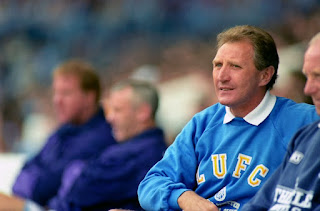 But in a title race that was described by the Guardian’s David Lacey as “the league title nobody appeared to want”, Leeds were almost as capable as shooting themselves in the foot as Manchester United.

A 2-0 defeat at Oldham in early February pushed Leeds back into second place.

Then, immediately after they reclaimed top spot a month later with a 3-1 win over Spurs at White Hart Lane, they lost 4-1 away to QPR – bizarrely, the same scoreline by which QPR had beaten Manchester United at Old Trafford on New Year’s Day.

However, Leeds responded in fantastic style, pulling off a 5-1 win over Wimbledon, with Chapman again scoring a hat-trick to claim his 14th goal in 30 games.

That left Leeds two points ahead of Ferguson’s side, whose three games in hand were both an opportunity and a burden.

The Red Devils beat Southampton to go top, but a draw against Luton and then a 2-1 defeat to Nottingham Forest allowed Leeds to return to the summit with their 2-0 win over Coventry, with David Fairclough and McAllister both scoring.

Ferguson’s men were still just a point behind with a game in hand – but they surprisingly lost it to bottom club West Ham, who had won just seven of their 39 games all season.

So on April 26, 1992, Leeds went to Sheffield United with their destiny in their own hands.

Wilkinson’s team talk could not have been simpler: win, and if Liverpool beat Manchester United later that afternoon, you’ll be champions.

It was a crazy game.

Alan Cork threatened to spoil the party by poking home a 28th-minute goal, but a bizarre Wallace equaliser just before the interval gave Leeds hope: Speed closed down a clearance and got his right foot to it, then the ball cannoned into Wallace’s thigh and looped into the goal – despite a Blades defender’s manful effort to punch it off the line Luis Suarez-style. 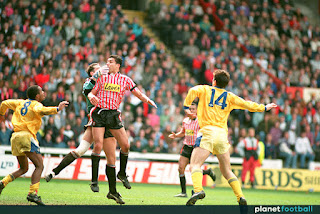 Home goalkeeper Mel Rees had been clattered by both Wallace and his own defender in the build-up to the goal, and McAllister exploited that by looping a free kick to the far post, leaving Rees in no man’s land and allowing Jon Newsome to put a diving header into the open goal.

Chapman disastrously turned John Pemberton’s powerful cross into his own goal to almost instantly wipe out Leeds’ advantage, but the final farcical goal was in Leeds’ favour.

Blades captain Brian Gayle took a much-too-heavy touch with his thigh on the edge of the box and, mindful of the lurking Wallace and Cantona, attempted to head it back to Rees – succeeding only in lobbing the onrushing keeper to give Leeds victory.

Liverpool promptly did their bit in the later kick-off, winning 2-0 through Ian Rush and Mark Walters, and the title was back at Elland Road for the first time since 1974.

It was a monumental achievement: Wilkinson’s 10-year plan for a Division Two club, achieved in just three. Until Leicester City’s heroics in 2016, that was the last time a club had won the title so soon after promotion into the top flight.

Leeds’ defence of the title went even more disastrously than Leicester’s, but Wilkinson had succeeded in returning Leeds to the top of the game, and they would remain competitive for years to come.

Their finest moment in the years that followed came in 2000-01 and that Champions League challenge, with Batty the only player still at the club from their 1992 triumph.

Yet despite a fine career for Leeds (two spells), title-winning Blackburn, two second-placed finishes with Newcastle, and 46 England caps, Batty still can’t quite believe he played such a key role in his hometown side’s title triumph.

He told Daniel Chapman of The City Talking in 2015: “It’s weird, I would say midfield was the strongest part of those teams, but it’s weird you including me in that, because I don’t — the others are all good names in the game, aren’t they?”

Sadly, not all of that great midfield are still with us.

I’ve reported on hundreds of games over the past decade, but none of them even come close to the emotion of Leeds’ 2-0 win over Millwall on December 3, 2011 – the first match at Elland Road after the tragic death of Gary Speed.

Football has cause to pay its respects tragically often, but even allowing for his young age and the circumstances of Speed’s death, this was different.

The effusive tributes came from all quarters, and lasted from the moment the crowd entered the stadium to well after the final whistle.

When McAllister, Strachan and Batty laid a wreath in the centre circle, there wasn’t a dry eye in the house, Millwall fans included.

Speed was a hero at Leeds. He had come through the ranks as a trainee at the club, and the Welshman was held as one of their own every bit as much as Leeds born-and-bred Batty.

He will live long, long in the memory as one-quarter of the most complete midfield English football has ever seen.