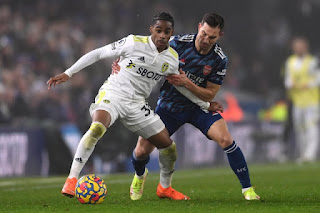 The look of concern and confusion on Adam Forshaw’s face said it all as Jack Harrison made his way across the pitch towards the dugout.

Just 30 minutes of Leeds United’s game against Arsenal had been played and Marcelo Bielsa was down to eight fit senior players. Harrison had taken a knock competing in an eighth-minute aerial challenge with Takehiro Tomiyasu and tried unsuccessfully, for what felt like an age, to run it off.

When the winger went off, Crysencio Summerville came off the bench for his fifth Premier League appearance of the season and his first since October.

The intervening period wasn’t entirely uneventful – he dropped out of the squad for the trips to Tottenham Hotspur and Brighton for reasons that were unknown but not linked to injury, before sitting on the bench for four straight games.

Although he went off again with 10 minutes left against Arsenal, it was the longest senior league appearance of the young Dutchman’s Leeds career.

It had bright moments, too, and certainly held more impact than the display of a limping Harrison.

Summerville started well enough, dropping deeper than full-back Stuart Dallas to give Luke Ayling an outlet, spinning and carrying the ball into the Arsenal half, finding Mateusz Klich and running ahead to try and take a man with him to create space.

In what became a theme of his performance, he got himself into the area to give Raphinha an option as the Brazilian shaped to cross.

There was a big first half tackle on Takehiro Tomiyasu but Summerville rarely got the best of the full-back in their physical battles.

And when Leeds’ man-marking system left him hedging his bets between pressing Ben White and covering Tomiyasu, he couldn’t get back in time to stop the Japanese international receiving the ball and feeding Martin Ødegaard who sucked Luke Ayling into the middle and bypassed him, as Bukayo Saka went on to score the Gunners’ third.

Tomiyasu got the better of Summerville in the second half when Klich sent a dangerous low ball to the back post, the youngster unable to get ahead of the defender, but at least Leeds had presence in the area any time a cross from the right was threatened.

His influence on the game waned and then waxed again, finally being played into a pocket of space on the left before feeding Tyler Roberts who, as it turned out, had not gone on an overlapping run.

That was one of few moments when Summerville stayed wide, playing more of an inside role than the one Harrison traditionally occupies, but it was out on the left that he helped work Klich and Joe Gelhardt into the area before the latter won Leeds’ penalty.

His big moment arrived just before he went off, ghosting in between defenders to meet another good cross from Klich with a spectacular, acrobatic effort that went awry. At least, however, he was in the right place, with the confidence to try something special.

Something special is what he’ll need to produce if Harrison fails to recover from his knock in time for the Boxing Day trip to Anfield.

There may well be an argument that with Harrison going through such a rough patch in terms of beating defenders and producing end product, Summerville could be worth a shot.

But it would be a huge call to pit the 20-year-old against one of what Gary Neville has described as the best full-back pairing in Premier League history. Trent Alexander-Arnold’s contribution to the Liverpool attack is so significant that whoever Bielsa plays at left wing this weekend will be required to put in a mammoth shift, defensively. That in itself feels likely to tip the Argentine towards Harrison, if fit, or Daniel James if he himself has recovered from a groin issue.

Summerville showed plenty of willingness to track back against Arsenal and got stuck in with tackles, interceptions and pressing, but Harrison has been entrusted with the entire left side of the pitch on previous occasions and James is a workhorse. The left is where Leeds cannot afford to get it wrong because Junior Firpo, returning from suspension, will have all he can handle in Mo Salah and the left-back has required assistance in games this season when one-v-one defending has proved problematic.

Jurgen Klopp’s title challengers could hurt Leeds from almost anywhere but Salah and Alexander-Arnold warrant extra special attention so a relationship between Firpo and Harrison that hasn’t exactly flourished but has shown signs of developing, could be key.

Giving Liverpool’s right side problems of their own will also be vital. This season’s paucity of goals and assists aside, Harrison has proven he can do it – it was at Liverpool that he announced his Premier League arrival with a special goal.

He has to become again the player who scored eight and assisted eight in a fine first top-flight season and it has to start somewhere. What better place than Anfield and what better time than now.