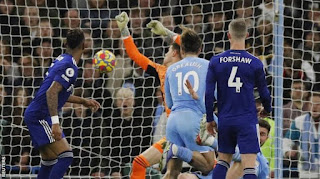 Manchester City tore Leeds apart with an attacking masterclass to increase their lead at the top of the Premier League to four points.

The defending champions were at their scintillating best as they racked up their biggest victory of the season and moved further clear of Liverpool and Chelsea, who both play on Thursday.

In truth, City could have had far more than their seven goals such was their total dominance and the ease they repeatedly ripped through the visitors' increasingly ragged defence.

Phil Foden opened the scoring after eight minutes, following up after Rodri's effort was saved - although Stuart Dallas should have done far better with his attempted goal-line clearance.

Foden's goal was City's 500th in the Premier League in 207 games under Pep Guardiola, with the Spaniard becoming the quickest manager to reach that landmark - the previous best was Liverpool boss Jurgen Klopp, who took 234 matches.

It only took five minutes more before goal number 501 arrived, with Riyad Mahrez given time to bend in a cross from the right of the area for Jack Grealish to nod home a rare - for him - headed goal.

City did not stop coming forward and Kevin de Bruyne joined the party just after the half-hour mark, firing home from a Rodri pass for his first goal since mid-October.

That made sure of a seventh straight league win for Guardiola's men but they were in the mood to dish out more punishment against a side that took four points off them last season, and beat them here with 10 men.

The second half had barely started when Mahrez made it 4-0, with a low shot that deflected in off Junior Firpo, before De Bruyne made it five with the best goal of the night, a thunderous strike into the top corner from distance.

John Stones made it six at the second attempt after Aymeric Laporte's header was saved, and there was no respite for Leeds goalkeeper Illan Meslier as Nathan Ake headed home City's seventh from a Foden corner.

Leeds' fans were still singing at the final whistle but their defiance was not matched by their injury-hit side, who remain 15th after this demoralising defeat, and on the fringes of a relegation fight.

Guardiola had said before kick-off that his players "knew they had to suffer" against a Leeds side led by his old mentor Bielsa, but this turned into an extremely enjoyable evening for the City boss.

As well as seeing his side sparkle for 90 minutes and score seven goals, there was a welcome return to goalscoring form for De Bruyne and Grealish.

Grealish's header was only his second league goal for City since his £100m summer move, and his first for the club since mid-September.

Illness and injury have meant De Bruyne has been below his best for most of this campaign but he showed his undoubted class here, notably with the unstoppable strike for his second goal.

The Belgian is still to register an assist in the Premier League this season - unusual for such a reliable creative force - but that statistic will surely not bother him much after a performance like this.

City have relied heavily on Bernardo Silva for attacking inspiration in recent weeks while waiting for Grealish to find his feet and when De Bruyne has struggled for full fitness, but this was a night when everyone shone.

Leeds, meanwhile, are left to lick their wounds because there were no positives for them to take away from a hammering like this.

They did at least trouble City goalkeeper Ederson a few times in the second half but by then the contest was already long over.

The fearless attacking play that saw them take three points here in April was nowhere to be seen, and the hole left by injured midfielder Kalvin Phillips was all too evident.

Bielsa and his players must regroup before they host Arsenal on Saturday evening, but it must be a worry for the Leeds manager that he does not appear to have many options to shuffle what is a slim-looking squad.