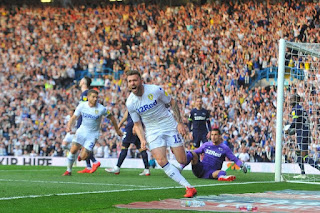 Stuart Dallas insists the only way is up for Leeds United after bouncing back from their “terrible” failed promotion bid.

In the 2018/2019 season, the Whites came tantalisingly close to their long-awaited promotion before faltering form in the latter stages of the campaign denied them an automatic promotion spot.

The hopes that were then pinned on play-off qualification were shattered in the semi-final, as Derby County came back from a 1-0 home-leg defeat to put Leeds out of the running in a dramatic reverse fixture.

In footage from Take us Home, the Amazon series which documented the club’s journey to the Derby loss, Dallas is one of several players visibly emotional after the game, wiping away tears as he embraces chairman Andrea Radrizzani in the tunnel.

This week, the 30-year-old has shared how it feels to recover from the campaign which came to nothing.

“The first year we failed in the play-off semi-final it was as if the world was ending, it was terrible,” Dallas said. “For us then to bounce back and get the club back to the Premier League a year later is unbelievable. It’s been incredible, this club’s only going to get bigger and better as well.”

Though Leeds supporters waited 16 years for the club to be restored to its former top-flight glory, Dallas recognises that fans’ appetite for success won’t stop now that his side have achieved Premier League status.

“We’re at a club where the expectations are huge,” Dallas told Carl Frampton’s podcast, A Different League. “And now we’re back in the Premier League, they’re even bigger, but if you can’t deal with that then you’re in the wrong game.

“The pressure is massive at this club, of course it is.”

Following two successful seasons, first sealing promotion from the Championship then exceeding expectations in their first season back in the Premier League, Leeds’ recent poor form has prompted sections of the Whites fanbase to voice concern.

But Dallas says that these critics form a minority, while most supporters are behind the team all the way.

“Players are going to go through times when they’re not playing well,” Dallas said.

“Of course there are some supporters, as there are wherever you go, who will give you abuse if you’re not playing well - but one thing about this club is that the fans will always back you.

“As long as you give 100 per cent when you pull on the shirt, that’s all they ask for.”