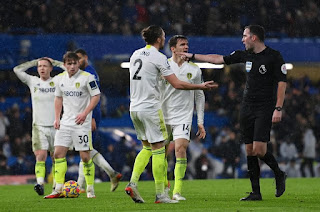 Kalvin Phillips and Liam Cooper dropped out of the squad through injury as Jamie Shackleton came into the line-up alongside Jack Harrison.

Pascal Struijk was still absent from the matchday squad, which came as a bit of a surprise following a recent hip injury.

The Whites travelled more in hope than expectation to the capital though put in a performance full of fight.

Leeds took the lead from the penalty spot after an uneventful opening half an hour.

Dan James sprinted onto a ball inside the area and Marcos Alonso produced a clumsy challenge to leave referee Chris Kavanagh no choice but to point to the spot.

Raphinha stepped up and made no mistake as he stuttered towards the ball before firing United into the lead.

Chelsea offered little with Illan Meslier only required to deal with crosses from deep and shots from range.

The hosts were handed a way back into the game on the stroke of half-time with help from the visitors.

Meslier's throw found Dallas but it was read and intercepted by Alonso.

The Blues full-back charged to the byline and found Mason Mount in the area who swept home at the near post to level proceedings.

Thomas Tuchel's side then took the lead just before the hour mark with Raphinha punished by VAR for a tackle on Antonio Rudiger.

Jorginho stepped up to score after a lengthy review and sent Meslier the wrong way.

Leeds mustered more fight and Joe Gelhardt made an instant impact from the bench in a stunning late cameo, sliding in seven minutes from time to turn home a Tyler Roberts cross home.

Defeat, though, came in difficult fashion as substitute Mateusz Klich kicked the back of Rudiger in the third minute of added time. The German international hit the floor once more and Kavanagh again obliged.

Jorginho did the honours and sent Marcelo Bielsa's side back to West Yorkshire pointless amid a furious end as both teams met in a shoving match at the full-time whistle.