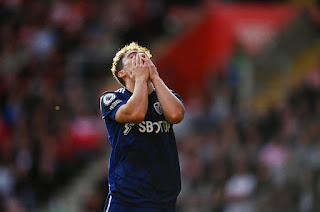 Marcelo Bielsa says he will fight until the end of the season at Leeds United, but he will do so without two more injured players at the weekend.

A 7-0 defeat at Manchester City compounded by more new injuries and a suspension have compounded the sense of crisis at Elland Road ahead of Saturday's visit of Arsenal.

Bielsa, who described Tuesday's loss as the worst performance of his time as Leeds coach, was in belligerent mood when he faced the media on Thursday.

"I'm going to fight until the end of the season without any doubt and I hope nothing happens that doesn't allow me to do that," said the Argentinian, who works on season-long contracts.

"Of course the job of a coach is very unstable. I don't have anything that makes me immune from that."

Junior Firpo is suspended on Saturday and Jamie Shackleton and Daniel James picked up injuries at Eastlands, though their loss is slightly offset by the return of Robin Koch.

Defender Koch has not played since the opening weekend of the season, where he filled in Kalvin Phillips's holding midfield role in a 5-1 defeat at Manchester United. He returned to training at the weekend after pelvic surgery, followed by illness.

In an ideal world, Bielsa would prefer Koch to get some minutes under his belt for the under-23s but he admitted last week the process might have to be accelerated. Koch is Leeds's only fit centre-back. Luke Ayling played there in the last two matches, but might be needed in his normal right-back position with Shackleton and Firpo out.

“It’s not an evaluation we have made just yet," said Bielsa when asked if Koch was ready to start. "Ayling came back to play as a starter after just 45 minutes with the under-23s.

“Koch has accumulated training sessions that are sufficient.”