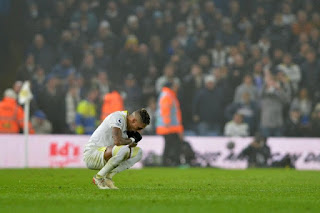 There was to be no Christmas miracle for Marcelo Bielsa and Leeds United at Elland Road, for that's what it would have been had a threadbare team managed to beat Arsenal.

When your unavailable XI would arguably be favourites in a game against those left standing, calling it an injury crisis feels very much like under-egging the pudding.

Leeds aren't just injury-hit, they've been cut off at the knee as Bielsa bravely and gamely insists it's just a flesh wound.

Many of their fellow Premier League sides were declared unable to field teams due to Covid, but hamstring injuries are not contagious so for the Whites, the show went on. In fact it was the only top flight show in England on Saturday, the last fixture remaining and given the escalation of the Omicron wave, it took on a similar feel to the March 2020 Championship clash with Huddersfield Town - a game the justification for which was, in the face of scientific advice, questionable.

A circuit breaker will surely be on the agenda for Premier League chiefs when they meet on Monday and would prompt significant relief at Leeds, at least among fans.

Charlie Cresswell, who would have been in with a chance of a start, damaged his shoulder in training to leave Bielsa with nine fit seniors and a supporting cast of youngsters. A bench that had an average age of 18 and eight months, contained 15-year-old Archie Gray and just four Premier League appearances between them, all belonging to Crysencio Summerville.

For a team beaten 7-0 at Manchester City in midweek, even before the crisis deepened further, an in-form and unchanged for the fourth game in a row Arsenal presented more than a daunting prospect. It was mission impossible, not that Bielsa would think or admit it. With the Argentine there's an element of having to lie in a bed he himself made - keeping a squad of just 18 seniors is always going to carry some risk, but the standing-room-only-nature of Rob Price's treatment room can be filed as exceptional and unforeseen circumstances.

The freakish nature of some of the injuries also lets Bielsa off the hook somewhat. Cooper did his hamstring a mischief landing awkwardly, two of Struijk's bones collided and Rodrigo's bi-lateral heel pain is something the head coach hadn't previously come across in 31 years of managing. Someone landed on Cresswell in the final minute of training and Llorente, as Covid-conscious as they come in a squad all double or triple jabbed, caught it.

But the injury list did not fully explain or justify a disastrous first half that could easily have matched the Etihad score, had Illan Meslier not come to the rescue time and time again.

Leeds were porous, painfully so, and paid the price as three of the Gunners' 11 shots on target found their way into the net. Basic errors in possession and an inability to track runners left Meslier a sitting duck facing multiple marksmen.

While the second half was better, too much damage had been done and the 4-1 final scoreline felt fair enough.

From start to finish, though, the only consistency to be found associated with Leeds was the crowd. There was urgency in the air as they took seriously their pledge to give the boys a hand. There was urgency, too, in the way Leeds set off, Stuart Dallas catching Bukayo Saka napping to burst forward and win a corner that Raphinha then headed over.

Arsenal, though, were into their stride quickly and ominously. They should have led early. Illan Meslier had to save from both Alexandre Lacazette and Thomas Partey, while Saka managed to sidefoot wide with the goal gaping.

The disappointing thing about the opener, when it came on 16 minutes, was that Leeds had settled and were doing okay. But Jack Harrison gave the ball away and Adam Forshaw was unable to resist Lacazette's pressure, coughing up possession to Gabriel Martinelli, who finished well.

The crowd responded well to the goal and so did Leeds, an Ayling charge ending in a generous free-kick award to the visitors before Forshaw sent Raphinha away. When the Brazilian cut to the middle of the area, the whole ground thought he'd equalised only for his shot to slide the wrong side of the post.

It was a sliding doors moment. Arsenal doubled their lead when Dallas' pass was picked off and Granit Xhaka played Martinelli through on goal to chip Meslier.

Jack Harrison limped off to give Summerville a run out and Bielsa yet another headache, but once again the crowd responded, roaring Forshaw's fight as he charged into tackles.

Arsenal had more than that, though, they had the quality to pick Leeds apart and did so once more when Saka run in behind Dallas then popped up in the area to create space for a shot that crept home off Klich.

Leeds' worsening mood wasn't helped by the inconsistency in Andre Marriner's second half refereeing. He somehow missed Xhaka's boot crunching down on Raphinha's ankle, not even awarding a free-kick, and seconds later booked Joe Gelhardt for crunching Takehiro Tomiyasu's ankle.

Injustice helped keep the crowd in it and Leeds for their part looked less defensively inept and at least vaguely threatening going the other way. They managed to progress the ball to the final third, albeit without making the right decisions to turn territory into real chances.

And they made it interesting, link-up play on the left of the area ending in Ben White's desperate sliding trip on Gelhardt. Raphinha's penalty was perfect, high into Ramsdale's net.

Bielsa sent on Sam Greenwood and Liam McCarron for the final minutes, replacing Klich and Summerville who had just combined for a half chance, the Pole's cross fired over by the flying Dutchman.

Yet another giveaway in midfield, this time by Roberts, and another simple ball inside the full-back, this time Drameh, allowed Emile Smith Rowe to quell any notion of an unlikely late Leeds rebellion.

The din created by home fans as time ticked away belied the situation their club finds itself in. They have fan backing and fight but not a lot else going for them right now and certainly no semblance of luck whatsoever. If a Premier League circuit breaker does come, it could not be better timed because Leeds need a break.