For Leeds United to lose 4-1 in tough circumstances was forgivable, but too much of their football was not - Yorkshire Post 18/12/21 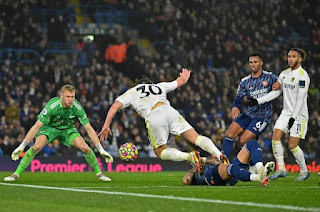 Elland Road was so pumped up when the players Leeds United were able to scrape together walked out for the start of their match against Arsenal that you just wondered for a moment if they might be able to do something ridiculous, despite everything the logical part of your brain was screaming at you. It turned out to be a fleeting thought.

Leeds were poor against Manchester City on Tuesday, but they were much poorer against the Gunners in an embarrassing 45 minutes. They tightened up a little after the break but it was more that Arsenal eased up in the way we had forlornly hoped Pep Guardiola's side might in midweek.

Of course there were reasons for it. Every other match in the Premier League on Saturday was postponed because of depleted squads but the difference was that they were missing players through a contagious virus. With the exception of Diego Llorente, plus the suspended Junior Firpo, Leeds's were injuries, so the show had to go on. Robin Koch was back for his first Premier League appearance since being given the runaround at Old Trafford on the opening weekend - then surgery, then illness.

He made it through the 90 minutes but others did not.

WIthin 10 minutes Illan Meslier had made three saves - one routine - and Bukayo Saka had put an easy shot wide. Jack Harrison had picked up a knock which he tried in vain to run off.

Just after the half-hour Leeds were forced to turn to a bench which did not have an outfield player over the age of 20 (goalkeeper Kristoffer Klaesson is knocking on a bit at 21). Archie Gray, grandson of Eddie, is 15.

Even the video assistant referee was against them, Michael Oliver bafflingly not giving a red card for Granit Xhaka stamping on Raphinha's ankle in the second half with referee Andre Marriner in close proximity, but apparently not so close he could not even see a foul.

So there were valid excuses.

But try as the crowd might to harness the sense of injustice that their club have a history of thriving off, there was only so long before reality dawned. When the third goal - one Leeds would have been disappointed to concede even if they had put out the under-12s - went in after 40 minutes you could feel the last vestige of hope sucked out of Elland Road.

When Arsenal fourth goal went in, shortly after Raphinha's penalty, plenty got up and headed straight for the exits. The majority that stayed, however, made their support for Leeds heard in the noisiest possible fashion. The vast majority who have followed Leeds from the stands this week have been outstanding but their players have let them down.

Not only were Arsenal up for it on the sort of cold, foggy night that has a history of scaring them off, Leeds were all over the place.

So many straight passes completely dissected a midfield powerless to stop counter-attacks. As they did at Old Trafford in August, and when Liverpool were here in September, Leeds had manufactured an open game which suited the opposition more than them.

It took 16 minutes for Leeds's - or rather Meslier's - resistance to be broken.

Adam Forshaw, one of the more impressive figures in Leeds's recent struggles, went down in his own penalty area appealing for a free-kick after an attempt to tackle Alexandre Lacazette that was just weak. Gabriel Martinelli found the net.

The second after half an hour came from their 10th shot, a very straight-forward Xhaka pass playing Martinelli through one-on-one to dink the ball over Meslier.

Leeds still not learn their lessons, giving the ball away sloppily five minutes later only for Meslier to bail them out, making himself big to deny Lacazette.

There was another straight Xhaka pass in the build up to the third, but an eternity between Lacazette receiving it and he and Saka bundling their way through alleged tackle upon alleged tackle before the latter's shot deflected in off Mateusz Klich.

The understandable outrage when Xhaka's non-punishment was followed two minutes later by a yellow card for Joe Gelhardt - correct if the tackle on Takehiro Tomiyasu was viewed in isolation but uncomfortably contrasting with Xhaka's - threatened to make Leeds's next absentee a suspension, although Stuart Dallas threatened that by going down injured shortly after being booked for a needless pull. Fortunately he carried on.

There has been an incident in the West Stand in the first half too. Leeds are already under investigation for objects apparently thrown from the South Stand against Brentford.

At least Leeds gave their fans a goal to celebrate and Gelhardt, the Great Whites Hope, was involved. A couple of minutes after Tyler Roberts' limp toe-poke wide, Ben White brought Gelhardt down in the area and Raphinha smashed the spot kick into the roof of the net.

Sam Greenwood and Liam McCarron would make Premier League debuts from the bench, whilst right-back Cody Drameh made a first start.

Ten minutes later Roberts gave the ball away badly and Martin Odergaard played another routine for Emile Smith Rowe, who so delighted Leeds fans as a Huddersfield Town loanee, to complete the misery.

To lose even 4-1 in such difficult circumstances was forgivable but we need to see more of the fight so evident in the stands on the Elland Road pitch if this nightmare is not to get worse.