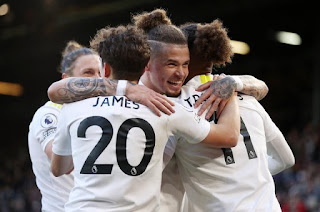 Kalvin Phillips wants a new contract at Leeds United where he is 'very happy' despite a tough start to the season.

The Yorkshire Pirlo, as he is affectionately known among Whites supporters, has risen to stardom in English football over the last two years.

Phillips helped the Whites return to the Premier League in July 2020 after 16 years away, before going on to star for his country at the delayed Euros last summer.

The 26-year-old has been a key figure in the Elland Road outfit's recent resurgence back to prominence in the top tier under head coach Marcelo Bielsa.

He has turned from a Championship midfielder into one of the best holding player's in Europe, earning 17 caps for Gareth Southgate's Three Lions so far and England's player of the year award.

Naturally, with increased performance amid a world spotlight comes talk of a big money move away from Thorp Arch, but Phillips - whose contract currently runs until the summer of 2024 in West Yorkshire - has dismissed any thoughts of looking elsewhere, stating he is more than happy at home.

"I just want to focus on getting back fit," Phillips told Mail Sport, having been ruled out well into the new year with a hamstring injury.

"But I speak to the owner [Andrea Radrizzani] regularly. I want a new contract. I’m very happy here."

United's second campaign in the Premier League hasn't been as fruitful as the club's first season back as yet, which saw Bielsa mastermind a ninth-place finish at the first time of asking.

Injuries have played a major role - no less than 10 players missed the Whites last fixture with Arsenal - though there is no time to dwell for Leeds, who will be wanting to increase the current gap of five points to the relegation places.

"One of the main things is that we’ve now played every team before. We are not new any more. A lot of teams are coming to us and knowing how to play against us," Phillips said over this season's hardship.

"They are changing their formation two or three times every game, and it does cause us disruption in the way we play. There is a bit of confusion.

"We’ve played like this for four years and I can honestly say we’re not doing as well as last year, but I also think we’ve been quite unlucky. Some games we’ve lost in the dying minutes, we maybe could have dealt with them better.

"I’m not a person to blame people or blame the manager. I’m more a person who blames myself. I want to do as best as I possibly can for the team. But when I’m sat here injured I can’t do that."

Asked whether it was possible for Bielsa to change his set style in a bid to improve results, he added: "No, we don’t change. The manager is very stubborn in the way that he plays. He knows what he wants to do.

"We’ll just stick to what we know and work as hard as we can and play the way we do. It’s exciting football, not just for us, but the fans. We don’t want to defend for 90 minutes and try to nick a late winner. That’s not how we play."