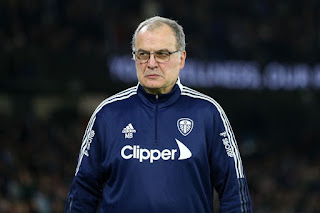 While 2020 brought welcome change at Leeds United, 2021 has been a year of consolidation.

Maintaining the club's Premier League status was achieved as early as March, although Leeds are unlikely to complete that particular task so quickly next year.

2022 may well be a year of considerable upheaval at Elland Road. As ever, Marcelo Bielsa's one-year contract expires at the end of the season, while 49ers Enterprises' increased stake in Leeds United indicates greater involvement from the Stateside consortium in the near future.

On the pitch, Kalvin Phillips and Raphinha will no doubt be subject to speculation surrounding their futures once the summer transfer window rolls around, ahead of the 2022 World Cup in Qatar.

In short, lots could change at the club over the next 12 months, but uncertainty is not necessarily a bad thing.

If 2022 is to be Andrea Radrizzani's fifth and final year in charge at Elland Road, he can ensure there is a smooth transition to full - or majority - 49ers' ownership with a succession plan for the Board, the management as well as the players and academy.

This could be the most crucial period of the Italian's ownership. He has been instrumental in delegating responsibility to trusted individuals and self-funded Leeds' return to the top flight, but as he stated upon securing promotion, consolidation is of critical importance, especially now there are multiple other factors including a change of ownership at play.

July 2020 - Leeds United are promoted to the Premier League

May 2021 - Peter Lowy, Massimo Marinelli and Sandro Mencucci are appointed to the Board

The most important thing for Leeds United as an entity in 2022 is that the club continues to move forward. If there is change at boardroom level or amongst the managerial and coaching staff, the course the club have plotted must not deviate.

This can be achieved by sustaining the current level of investment in the Thorp Arch training facility, ploughing ahead with plans to redevelop Elland Road and freshening up the playing squad.

There is no getting away from it: the 49ers are coming. With a 44% stake in the club, 49ers Enterprises now control a sizeable chunk of Leeds United and hold significant voting rights.

It is likely we will see the 49ers take over from Radrizzani on a more permanent basis in the next two years. This is owing to an agreement between the two parties, recently made public, that will ratify a sale reportedly worth in excess of £400 million by January 2024.

As with wholesale change in any business, there will be a period of transition and new faces to acclimatise to. It is a safe bet to assume the 49ers will bring in their own movers and shakers in the executive department, therefore integrating the likes of Angus Kinnear and Victor Orta with the American consortium will be of great importance if the old regime and new regime are to work harmoniously.

With a foot in both camps as current chairman, Andrea Radrizzani can operate as outgoing matchmaker in that sense.

There are no guarantees in football, and Marcelo Bielsa's future at Leeds United falls into that category. Despite difficult results and swipes from critics, the fervour and adoration for the Argentine at Elland Road is as strong as ever.

But, that doesn't mean he will remain in charge beyond this summer, even if all concerned with the club wish for that to be the case.

At 66 years old, away from his family in Argentina, Bielsa will bow out when he sees fit. He is currently the Premier League's oldest manager after Roy Hodgson walked away from Crystal Palace in the summer, and his departure is an eventuality all Leeds fans will need to reconcile themselves with at some point.

Just as there are no guarantees he will stay, there are none that he will leave, either. Despite his advancing years, Bielsa's enthusiasm for the game remains and the opportunity to continue his work at Leeds United is an open invitation.

If the unthinkable does happen next summer, no doubt Bielsa will have informed the powers that be well in advance, in order to prepare the club and squad for the next manager to come in and hit the ground running. If that is to be the case, it will be without doubt one of Radrizzani's most important tasks during his tenure as chairman of the club.