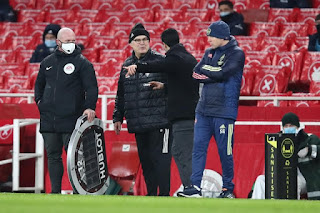 Leeds United head coach Marcelo Bielsa has made an admission about the standing of Saturday's visitors Arsenal - but is more focused on rediscovering the "best version" of his Whites.

Arsenal have stormed up the Premier League table to fourth place having won nine of their last 14 games, only three of which have resulted in defeats.

The Gunners are 12 places and 13 points higher up the table than fifth-bottom Leeds who have seven players injured plus Junior Firpo suspended and Bielsa's Whites were walloped 7-0 at Manchester City on Tuesday night.

"They're one of the important teams in the league," said Bielsa of Arsenal.

"But at this moment we are especially concerned about getting back to our best version than the opponent that we're coming up against.

"Any game that was next was always a possibility to come back from the image we showed in the last game."

Assessing whether he would use adversity as a motivational tool, Bielsa said: "I face what I have to. And I try to act with as much strength and fortitude as possible.

"I would prefer adversity not to be something we need to grow but if it does happen, more than interpreting it as something that we can't save, I try to imagine it as a new challenge, harder than the previous ones."