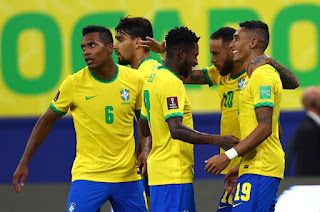 As 2021 comes to a close, Raphinha can reflect on a year where he enjoyed a Brazil breakthrough to remember.

Leeds United’s star wide man has seen his stock rise to world levels since making the move to Elland Road from Stade Rennes around 18 months ago.

Raphinha has played 46 Premier League games for the Whites, scoring a total of 14 goals while notching nine assists.

His form in England’s top tier saw him earn a call up into the Seleção national squad in September though he was forced to wait an extra month amid Covid travel restrictions.

The 25-year-old made up for lost time in quick fashion, providing two assists on debut before bagging two goals in his third appearance in five days to round off a stunning opening week as an international player.

Raphinha has notched five caps under Tite’s watch so far and could yet be called up in late January for his nation’s final World Cup qualifiers despite Brazil having already secured a spot in Qatar.

A childhood dream, though, was realised for the Whites winger turned international superstar and one he could barely believe.

“All Brazilian footballers dream of representing the national team,” Raphinha reflected recently on his first steps with his country.

“So, of course putting on that shirt and playing in the highest level of football – Championships, World Cup qualifiers, coming up against iconic rival teams and rival players.

“It all happened really quickly. One moment I was playing for Vitoria Guimaraes B team and then next moment I am playing at Leeds United, being called up to the national team.

“It’s just really difficult to describe. It’s the source of immense joy to put on that shirt that you often dreamed of wearing and then suddenly you are training with the best players in the world.

“You are training alongside players you had watched and cheered on from the TV or played as them in video games as well.

“Then, in your first international call up you score your first and second goals for your country. It is a forever moment – something that you will remember and eternalise forever. I have already framed that shirt as a memory. It’s just an amazing feeling and hopefully it is a feeling that will repeat itself many more times.”

Raphinha’s quick adaptation to the Premier League has impressed onlookers, as paper talk jumps up a notch heading into the winter transfer window.

Eight goals in 16 top-flight games this term has helped keep Leeds afloat above the drop zone so far amid a mountain of injuries in LS11. United are continuing to work on a new contract in West Yorkshire while Raphinha credits his swift adjustment thanks to a taste of home.

“That’s something that is really important when we leave home,” Raphinha said, of whether other Brazilians had helped him settle in England.

“In my case it is both Portuguese and Brazilian people. Everywhere I have been there have been Brazilians in the city and in the clubs that I have played at.

“He made me feel very welcome when I arrived at Sporting Lisbon.

“Even before I arrived at Sporting Lisbon, I was talking to him. He really helped and was an important figure in settling there.

“Also, he was an important figure in my development as a player and as a person. I see him as a role model – his work ethic, who he is as a person. He is someone I look up to.”