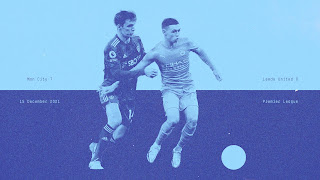 The goal that made me angry was Manchester City’s seventh of their seven, that were plenty to beat Leeds United’s none. Nathan Ake headed in a corner, that was that. Leeds are bad at corners but there was no need to be this bad. But United’s players were zombies at this point. They hadn’t given up, Jackie Harrison kept trying shots and stuff in the second half with his pre-game comments about finally being allowed to prove himself against his former club ringing in his own ears. But every time Leeds attacked, Manchester City attacked them twice as fast, and the clock was ticking very slowly.

The goal that summed up City’s mood was their fifth, Kevin De Bruyne’s second. Phil Foden thought he’d scored but VAR ruled him offside. So De Bruyne got the ball from the restart and thrashed it into the top corner from twenty yards. “We dropped five points against Leeds last season, we can’t forget that,” Pep Guardiola said afterwards. His players, he said, “maybe they felt that it is a more serious team than people think.” Which is another way of saying revenge. In Leeds we pay a high price for daring to succeed, and De Bruyne smashed the ball in like it’s what we deserved for trying. Manchester City do a few of these every season: last season Burnley, West Brom and Everton were all beaten 5-0; they won 5-0 five times in 2019/20, plus a 6-1 over Aston Villa and 8-0 against Watford; in 2018/19 they put six past Huddersfield, Southampton and Chelsea; before that 2017/18 had three more 5-0 wins, one against Liverpool, a 6-0 over Watford and 7-2 against Stoke. Everything about their play said Leeds had been lined up, since April, to learn how this works.

City’s first goal, after seven minutes, and De Bruyne’s first goal, City’s third after half an hour, were the templates for Guardiola’s City beating Marcelo Bielsa’s Leeds. “The idea of the solutions that I proposed, what I organised for the game, none of it worked,” Bielsa said afterwards, “so I have to understand the responsibility corresponds to me in an absolute manner.” The defensive idea is for Leeds to mark every opposing player except one, a centre-back, because that’s usually the worst player. You’ll often see a bewildered centre-back trundling through Leeds’ empty midfield with the ball at their feet, wondering why nobody comes to stop them, until they realise it’s because they have nobody to pass to and Leeds are waiting for them to give the ball away. The problem when playing Manchester City is that their defenders, even their goalkeeper, have exceptional abilities making possession with any one of them extremely dangerous. Dias or Laporte couldn’t be left alone, and engaging them often left Rodri either free or with the beating of Tyler Roberts, and the only upside to the light-blue defensive midfielder’s surges towards blues-blue United’s area was thinking that at least City won’t need to buy Kalvin Phillips. For the first goal Rodri slalomed past Luke Ayling too and then all the marking was lost, Foden finished. The third goal came after Raphinha claimed a foul by De Bruyne stopped his breakaway. Foden dropped, taking Ayling with him, laid the ball off to Rodri, and his pass put De Bruyne through on Meslier in the exact space Ayling had left, part strawberry, part lightning, coming as if from nowhere but when you wind the tape back you realise how far you have to wind back for the start of it: De Bruyne, hovering behind Adam Forshaw, started that run before Foden had even given the ball to Rodri. From the teamsheet, he was supposed to be on the other wing anyway. I used to tune into La Liga games to revel in Guardiola’s Barcelona playing just like this. It was better when it happened further away.

Manchester City haven’t changed since winning the title last season, though, when Leeds took four points off them. The win even came with ten players. What changed about Leeds? In the draw at Elland Road, there was a little luck in the early stages, the momentum from promotion still propelled them, and Kalvin Phillips was crucial, learning how to cope in the middle. In the away win, Phillips was important again: defensively, he sits, while Forshaw in his place roams. Liam Cooper’s red card also forced Leeds into containing, Diego Llorente, Robin Koch and Pascal Struijk joining Phillips, Ayling and Ezgjan Alioski at the back. Guardiola left De Bruyne on the bench that day, too.

Why didn’t Bielsa change something to contain this, when it started going wrong? If not the result, then the dignity, maybe keeping the score under six, nicking one or two back like at Old Trafford? I suppose Bielsa would ask, what should he have changed, and how? Those nicks against six weren’t the product of changes. His most recent dismissal of the concept of plan bees was the other week, when he explained how teams can’t switch styles all the time because of how long it takes to learn and implement. Leeds don’t have another way of playing they can suddenly switch to halfway through a game, and I suppose the danger is that after four years of playing one way, dropping a brand new plan in fifteen half-time minutes risks even greater disorganisation. It’d be like dropping an indoor cat in the wild, expecting it to fend for itself.

The other aspect from Bielsa’s point of view is that the plan wasn’t wrong, the plan wasn’t working. These questions came up towards the end of last season, when Leeds got their 0-0 draws with Chelsea and Manchester United, 1-1 with Liverpool. What had changed to stop the fours and sixes from being scored against them, where had the basketball gone? The answers were nothing and nowhere. Bielsa never sends his teams out to win or lose 4-3. He believes his football will win games to nil, beautifully. What changed last season was it started working better at the end than the start. In one sense this 7-0 defeat to Manchester City represents an absolute failure of Bielsa’s football, and that’s what he seemed to think. “I insist that the message the game leaves is that what I proposed was not good enough,” he said, but what he proposed was a version of what he always proposes, leading to the conclusion that Bielsa’s way will never beat this City team. Except for that time it did. Another way of testing Bielsa’s style in this game is to ask, did we actually see any of it? “We have never played so badly in these four years,” said Bielsa, and in that case, no wonder his style didn’t work. That indicates problems in the performance, not the philosophy, but Bielsa’s insistence on taking responsibility pulls the target back onto his beliefs, even while his immobile stare across the pitch as the players trooped past him at full-time suggested he wasn’t looking in his pre-match dossiers for the answers. With the players, after a defeat like this, “What we do in this case is to talk, and try to understand,” he said. Never mind what’s said in the press conference. Those conversations will uncover the true faults. I’d wish to be a fly on the wall but at the same time the idea terrifies me.

Losing 7-0 to Manchester City, somehow, does not. It’s United’s biggest margin of defeat since the 1930s, historic, I guess. But it’s only different by a small degree from conceding six to Manchester United recently, twice. It was a similar demolition when West Brom won 4-1 in 2018/19, avenged by a 4-0 win four months later. Leeds were up the top of the league that whole time. I drank my coffee this morning from a mug with ‘Gracias Bielsa’ written on it, recognising the architect of our brilliant promotion, but part of the weird rollercoaster thrill of this whole relationship is this teetering sense of collapse and you kind of have to go with it. It’s all glory when it works until it doesn’t, but at least there was glory. Pep Guardiola has set Manchester City up so that opponents’ options are usually limited to choosing the manner of their defeat, and after Leeds’ extraordinary results against them last season, losing 7-0 is not an invitation to relegation but a sit-you-down into the Premier League’s humdrum middle. Upon promotion, we wanted Leeds to be Super Leeds again, the team that swaggered through that 7-0 beating of Southampton in 1972. But soon it’s 2022 and Manchester City are that team, not us. We’ve got to become Southampton, eight seasons deep in the Premier League, losing 9-0 once a season, finishing 11th or 15th. It sucks, this sucks, that sucked, and what else sucks is I can’t even feel too upset, already moving on thinking we’ll beat Arsenal on Saturday because — 5-0 losers to City, 4-0 to Liverpool — they also suck.