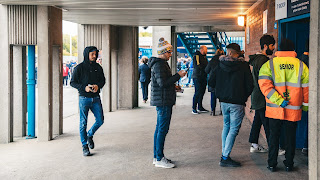 This morning The Athletic’s Phil Hay and Matt Slater published a follow-up explainer to yesterday’s exclusive that 49ers Enterprises have an option to buy 100 per cent of Leeds United, including Elland Road, by January 2024, for an agreed price around £400-475m. (I blogged about it here, with some bonus Deebo Samuel love.) There’s not a lot that’s brand new in the article, it is as it says, an explainer running through the main points of the news and adding context about the story so far, what it might mean, how the different ownership model (group rather than individual control) might work, why Americans are interested in buying Premier League clubs more generally. It’s useful stuff for anyone who doesn’t follow the business side too closely.

For Andrea Radrizzani, it was a story too far. Replying to The Athletic on Twitter, he said, “For someone as good as you I expect more! Aser has option to void the call (effect before 2024) but the main point is that we are only focused on working together and growing Leeds United Anything can happen between now and 2 years time (when many may have forgotten the article!)”

For someone as good as you I expect more! Aser has option to void the call (effect before 2024) but the main point is thay we are only focused on working together and growing Leeds United Anything can happen between now and 2 years time (when many may have forgotten the article!)

As always, the first question is, why has Radrizzani chosen to tweet about this, rather than choosing one of the umpteen better ways of responding either privately or publicly? His LiveJournal must have been the nightmare must-read of his whole high school. There was more, when co-author Slater disagreed with a fan saying Radrizzani has ‘rubbished’ his story, as Radrizzani himself added, “You are not informed well. It is in my control. Now please let end it here. Next time check with both sides and report the real or better don’t because you can create misinformation which can effect Aser business good luck”.

Has he "rubbished it", though? Looks like he is confirming the details of the story while challenging the view that a full 49ers takeover is inevitable. That's fine. That's business. But aren't you, as a fan, interested that there's an agreed path to a 49ers takeover in place?

Also as always, rather than shutting down the conversation, tweeting like this gives everybody more information than they had, but not enough to be useful, which is the exact equation that produces more speculation. Wouldn’t a short statement on Radrizzani’s Aser Group website be a better idea? Look, I’ll even write it for them. Could you post something like:

‘We are aware of reports about agreements between Aser and 49ers Enterprises regarding the future ownership of Leeds United. We dispute several claims in these reports, which do not accurately reflect the reality. We will not comment further due to commercial confidentiality, and ask that future reporting is done more carefully when it can affect the business of Aser Group. The two parties involved continue to enjoy an excellent relationship working together for etc etc etc MOT’

There. I am available for communications consultancy although I will be requesting high six figure fees and insisting on prior approval of all tweets.

Instead of that, Radrizzani’s enthusiasm for social media only invites everyone to scrutinise what’s between the lines of his replies. So let’s accept that invitation and do it. Why’s he so miffed? Because his Aser Group’s business is being made public, naturally, although we don’t get this reaction to reports of United director Sandro Mencucci meeting with various up-for-sale Italian clubs.

The specific point of contention seems to be the idea that this deal takes control of Leeds out of Radrizzani’s hands, that the 49ers’ takeover is done, dusted and inevitable. He seems to want more emphasis that what 49ers Enterprises have is an option, which they may not take up, and Aser have a clause in the agreement to void it.

This is already pretty implicit in The Athletic’s coverage, though; it’s presented in one tweet that ‘unless that plan goes seriously awry’ this deal will go ahead as agreed, and if ever there was a club where things can go seriously awry, we’ve supported it. The void clause has been in all The Athletic’s reporting, a curious part of it in fact:

It has been suggested to The Athletic that if Radrizzani’s company Aser was to buy another club anywhere in the world in the meantime (before January 2024), the deal with 49ers Enterprises would be voided.

Who actually has control here is an interesting question. I originally took this void clause to be 49ers Enterprises’ way of avoiding getting tangled up in Radrizzani’s conceptual web of networked Euro clubs that he’s often talked about. ‘He’d better not buy another club, because if he does, we’re out!’

But unless there’s another clause he’s talking about this seems to be Radrizzani’s way of voiding the deal, which looks like a pretty complicated way to cancel. (It’s true that without seeing the agreement, there could be a hundred ways to void it.) This clause being public makes any future reports of Aser interest in taking over Salernitana, Genoa, Palermo or the rest fraught with new intrigue as it’s now a potential slo-mo 49ers deal killer. It’ll be like watching someone with an allergy ordering a nut roast. ‘Are you allowed to eat that?’ we ask. ‘I know what I’m doing!’ they yell. Their food arrives, they calmly eat, we wait for signs we should call an ambulance. Or they talk to owners of a Serie B club, negotiations drag for weeks in the press, we wait to hear angry noises from Santa Clara.

Another relevant thought is that in November, when the 49ers’ shareholding increased from 37 to 44 per cent, there was a tweak to the Leeds United company constitution, as explained to the YEP by Price of Football’s Kieran Maguire. It was nothing major, he said:

“It’s all to do with the rights of the shareholders and the ability they have to sell their shares. If you, or I, owned 50 per cent of a company and I was thinking of selling, under many constitutions if I received an offer for the shares I’d then have to say to my fellow investors that I’ve had an offer, but you have first refusal.”

The new way, a Leeds United shareholder can sell to anyone, without offering their shares to other existing shareholders first. That effectively lets any current shareholder scout around for new investors who might pay more for their shares than the people already invested. Tweaking the constitution in November, to allow shares to be sold to anybody, now looks more interesting given the report’s claim that an option giving a fixed price for 100 per cent shareholding to the 49ers until 2024 was sorted out in January.

Let’s bring in BBC Leeds’ Adam Pope on that ‘fixed price’, though; he understands that ‘due to a multiple of revenues that the price could become £500m or more depending on factors such as spend going forward, league status, etc.’

I understand that due to a multiple of revenues that the price could become £500m or more depending on factors such as spend going forward, league status, etc. Option for Aser to void the deal too. 49ers & #lufc still working closely appears to be the message.

So perhaps it’s the headline £400m price Radrizzani doesn’t like seeing out there, when the eventual owners of Leeds United — 49ers or otherwise — could end up paying more. Or less if we get relegated. (But we won’t do that.)

Let’s wrap up. The main takeaway from Radrizzani’s tweets is that this option with 49ers Enterprises does exist, because rather than deny it, he’s talking about his ability to void it. That’s one thing. What I think he wants known from all this is that someone other than 49ers Enterprises could still end up owning Leeds, whether that means the club remains with Radrizzani for longer or is bought by someone else, for the same price or different. An option is an option is an option. ‘Anything can happen between now and 2 years time!’ he tweeted. Or in two hours. I wasn’t pondering any of this today before all that tweeting got me thinking.