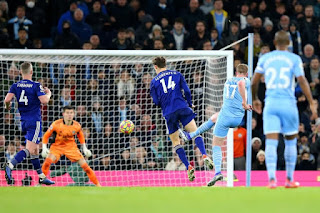 Leeds United fell to their heaviest ever Premier League defeat as champions Manchester City ran riot with a 7-0 romp in Tuesday night's clash at the Etihad.

City created a host of chances in a completely dominant first-half display and led 3-0 at the break through strikes from Phil Foden, Jack Grealish and Kevin De Bruyne.

The onslaught continued after the break and Riyad Mahrez bagged his and City's fourth before De Bruyne rifled home a rocket to bring up the nap hand.

Despite a tremendous double save from Illan Meslier, John Stones then made it 6-0 with 16 minutes left and Nathan Ake headed home City's seventh just four minutes later.

The hosts squandered a glorious chance in the seventh minute when Diego Llorente gave away possession and De Bruyne squared to Bernardo Silva who side-footed home from close range.

But City went ahead the very next minute as Rodri stormed through the middle of the park and Meslier's block fell to Foden who converted from the edge of the box despite a Stuart Dallas attempt to clear off the line.

The hosts were rampant and Pep Guardiola's side doubled their lead in the 13th minute.

After Junior Firpo was tackled by Rodri, De Bruyne's shot was deflected wide and from the second phase of play from the corner, a Mahrez cross was headed home by Grealish.

From a City free-kick, Aymeric Laporte walloped a volley over the bar and Grealish then worked an opening on the edge of the box but saw his shot blocked by Jamie Shackleton.

De Bruyne was the next to threaten when firing wide and Firpo was then booked for pulling back Mahrez meaning the left back is now suspended for Saturday's hosting of Arsenal after amassing five cautions.

The onslaught continued and a rising De Bruyne shot from the edge of the box was saved by Meslier.

From a rate Whites attack, City's Oleksandr Zinchenko escaped a handball on the edge of the area under pressure from Raphinha.

But City bagged a third in the 32nd minute when Rodri played in De Bruyne who powered home a clinical finish past Mesllier.

Leeds then lost Jamie Shackleton to injury in the 37th minute, Mateusz Klich brought on in his place as Dallas shifted to right back.

Moments later, City were inches away from bagging a fourth as a Foden effort from the edge of the box trickled just wide.

United finally threatened on the stroke of half-time as Firpo's header set off a Leeds break but Harrison and Dan James were unable to find any breakthrough and the half ended with De Bruyne smashing another dangerous shot just over.

Teenage forward Joe Gelhardt was brought on to replace James during the interval and Leeds wasted a potential opening three minutes after the restart as Dallas played in Harrison who failed to produce any end product in the box.

Instead, City bagged a fourth goal one minute later as as a low Mahrez attempt from the edge of the box took a big deflection off Firpo en route to beating Meslier.

Firpo then somehow escaped a second booking despite pulling back Grealish on the edge of the box and Meslier tipped the free-kick from Mahrez over the bar.

The hosts almost added a sublime fifth in the 53rd minute as a superb floated pass from Mahrez fed Ilkay Gundogan who prodded a volley just the wrong side of the post.

The offside flag then denied City a fifth in the 61st minute after Foden had tapped home a Grealish cross but seconds later De Bruyne fired home an absolute rocket into the roof of the net.

A strong save from Meslier then denied Mahrez but even a tremendous double stop from Meslier could not prevent City bagging a sixth in the 74th minute as John Stones eventually converted with a powerful rising finish from close range.

Even then there was more pain to follow, substitute Nathan Ake making it 7-0 in the 78th minute when heading home from a corner.