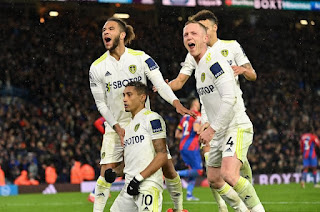 AS the first half of weeks go, Leeds United have had none better in a concerning 2021-22 season.

The return to action of two of their leading lights under Marcelo Bielsa in Patrick Bamford and Luke Ayling, who encouragingly featured for the under-23s on Monday night, was a welcome interlude of warmth amid the incessant recent cold.

If that was significant, then the sight of United securing just their second league win at Elland Road this term was more important in the context of their campaign. More especially in how it arrived. It was some encore, admittedly late though it was.

For most of a tense night, Leeds looked what they are: a side struggling for air in the relegation mix.

They needed something and it gloriously arrived in the third minute of stoppage time.

Marc Guehi’s raised arm which got in the way of Liam Cooper’s header yielded a check for handball as Leeds pushed more in sheer hope than conviction for a winner from a corner. The VAR checks took place, Kevin Friend had a look at the pitchside monitor and Leeds had their chance.

It was not the most spectacular and beguiling match of United’s time back in the Premier League, but to the pragmatists, the result might just be most important.

It could have been different if Christan Benteke – only Alan Shearer and Wayne Rooney had scored more goals on a Tuesday night in the Premier League – not spurned two big, big chances to win it. But Leeds had a Friend, in more ways than one.

In his programme notes, Leeds managing director Angus Kinnear, as is his wont, offered his own inimitable take on football subjects of the day and even referenced Chairman Mao’s ‘Great Leap Forward’ by way of one particular analogy.

The only leap forward that United followers are truly interested in is a jump up the league standings, away from danger. This was hopefully the start.

Under the lights, with a typically boisterous home crowd showing that strength amid adversity that Bielsa spoke about ahead of the game, plus a bit of rain to make the pitch conducive to their high-octane play, Leeds looked visibly determined to atone for the passive efforts against Brighton.

They set about Palace from the off – none more so than one of their own in Kalvin Phillips, who looked like a man on a mission.

A hard, but fair challenge on Leeds summer target Conor Gallagher set the tone and was lapped up by the Elland Road punters, with the early signs promising.

Adam Forshaw, in an advanced role, fired just wide – the move starting with a wonderful searching long pass from Phillips, as England manager Gareth Southgate watched on. Phillips then fired over after feverishly dispossessing an opponent.

But unfortunately, developments at the other end gradually led to more anxiety as Leeds faded. After a tentative start, Palace grew into the game and had an avenue of joy down Leeds’s left with Andre Ayew causing all manner of problems for an auxiliary left-back in Pascal Struijk – with that area of the pitch continuing to look highly vulnerable for United.

Struijk’s testing night yielded an inevitable booking towards the end of the half as he struggled to get to grips with Ayew in an opening 45 minutes when neither side produced an effort on target.

Leeds’s cause was not helped by Raphinha having an unusually quiet game by his standards.

Palace’s best chance came when Jeffrey Schlupp surged forward and saw his well-struck shot fizz just wide with the onus being very much on Leeds to rediscover their mojo in front of the Gelderd End. Bielsa set about doing something about it by bringing on Rodrigo for the disappointing Mateusz Klich. Firpo’s introduction for Struijk, toiling, on a booking and on the precipice of a dismissal, was more out of necessity

Within two minutes of the restart, the United head coach had a problem with Firpo, booked for catching Ayew.

The angst soon grew for a different reason when Rodrigo, given the sort of chance that all replacements crave soon after entering the fray, meekly fired off target from close in after Dan James squared the ball to him in front of goal.

On a night when it became undeniably clear that there were not going to be a surfeit of goals, it looked like a big moment in a scrappy game of few bonafide opportunities. It did not cost him.

Leeds, admittedly far from at their flowing best, at least persisted, while Wilfried Zaha and co waited in the hope of picking their pocket on the counter.

Benteke thankfully headed wide at the far post from Zaha’s cross before Meslier made his one important contribution of the night to keep out Benteke’s effort on the line after he struck out a leg from Ayew’s long pass.

The visitors had the extra gears and Leeds looked leggy and open. A point at the end would have been welcome. A win was Christmas come early.