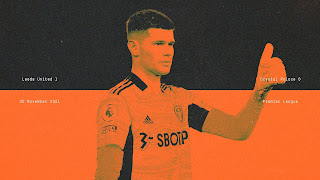 I have a back page clipping I’ve preserved all the way through from November 1991, a photo of Leeds United players celebrating in front of their fans in the away end at Villa Park. After pulling off a complicated corner routine they’d been trying for a year, Gordon Strachan and Gary McAllister look happier than the goalscorer, Lee Chapman, and the three of them are swamped by teammates in golden shirts from every angle. They’re not all there, but most of them, and David Batty is flying over the top of them. Team goal. Team celebration. The league title was on.

Now I’m looking at Jamie Shackleton’s face while he’s celebrating the last Leeds goal of November 2021, at Tyler Roberts, Dan James; at Stuart Dallas punching the air and punching Raphinha in the bollocks. Kalvin Phillips is in the thick of it, substitutes are running from all over, and all the players, even the ones usually tagged as ‘much maligned’ or being pulled about in manufactured controversies, are in the moment, untouchable, impeccable, delirious.

This was all to do with Elland Road’s second vital last minute penalty of the season, and maybe this is going to be how Leeds stay in the Premier League, taking every home game down to a stoppage time spot kick and taking them in turns. It was Rodrigo last time, against Wolves, celebrating by drop-kicking a corner flag. Raphinha this time who, after the scrum subsided, did a dance to camera that might never have ended if the referee hadn’t insisted on playing on. Some people will tell you that a last minute 1-0 winner like this hides sins, masks blunt edges of open play, gives a team something it doesn’t deserve. But by god it lifts the mood, into that escapist realm we go to football for. Why forsake that zone and rush back to reality when, speaking for my own heart, that’s the last place I want to be? These are the moments when football goes above itself to deliver more than a boring old three league points or the execution of a tactical plan. Remember Manchester City winning the FA Cup against Watford the other year, 2-0 up in the first half, 6-0 by the end? Even their fans started getting bored of the humdrum wins at Wembley. Give me a relegation scrap in November, a last minute penalty, a last minute winner. Nobody remembers how City played in May 2019, nobody will remember how Leeds played here. Leeds fans left the scene without a trophy but with much, much pleasure.

Were Leeds lucky? I’ve bemoaned the Peacocks’ bad luck i.e. cursed existence plenty of times, so maybe I should be reversing the view here. But no. Andre Ayew started the first half attacking Pascal Struijk at left-back like he was Junior Firpo (then actual Junior Firpo came on at half-time and Ayew’s influence waned) but it was right not to give a penalty when Struijk palmed Ayew’s back. The feeling of justice only increased with Conor Gallagher’s protests about this and every other decision: maybe we should have signed him, but I’m glad we didn’t sign him. Christian Benteke’s missed back post header, a pivotal second half chance, wasn’t put wide out of luck, but because, like Brighton’s Neal Maupay, he can’t score. His better attempt, surprising Liam Cooper and Illan Meslier with a hidden leg on a low cross, was kept out by phenomenal pitstop goalkeeping when Meslier obliterated the gaps between thought and action, stopping the ball on the line. This looked like surviving, but teams do give up chances, especially when they’re not playing great. A weird side effect of the anxiety that envelops a team out of form is that demands increase, as the risk factor of each tiny breach is magnified. You can get away with worse stuff when you’re playing well. Here, Leeds just had to get away with it, and did. The penalty given to Leeds wasn’t fortunate, it was correct, Marc Guéhi flying at a corner with his hand over his head. Given Crystal Palace’s poor record defending set-pieces Leeds should have taken advantage of this stuff sooner, but the game lasts as long as the referee says, and every second is valid until full-time. Scoring so late just feels better.

That Leeds didn’t create a great deal from open play before the penalty doesn’t push the result into lucky realms, either. Tyler Roberts missed an early chance when Dallas flashed a low cross in front of him, then stuck himself into a performance suggesting he’s learned from old videos of Alan Smith that if you can’t score, tackle. Sliding into a defender by their corner flag to force a throw-in might not be a goal creating action, but it sets a tone, as does Dallas bringing a successful battle with Wilf Zaha to its zenith by stealing the ball from his toes with his head, or Dan James charging into tackles on the left wing, and attacking like the only person in Elland Road relishing Firpo’s half-time introduction. Junior got right back to the horrors of Brighton in his first two minutes, giving up the ball and trading a yellow card for stopping the chance, but then his forward combinations with James were a big part of supposedly forward-looking Palace manager Patrick Vieira’s decision to throw Benteke on, start launching long diagonals at his head, and go full Warnock with the timewasting. Getting teams to do this is a very good sign for Leeds United.

The game was full of good signs. The winner wasn’t a reversal, it was garnish. A 0-0 draw wouldn’t have been as euphoric, but it would have been a point to respect. Leeds are adjusting to a bad season now, so they don’t looked shocked anymore, they look up for it. Returning players like Pat Bamford and Luke Ayling don’t just represent numbers in a small squad, but characters, like Adam Forshaw, getting a grip of Struijk after he was booked. The penalty was the highlight, stuttered away by heart-stopping Raphinha. The effect on the league table was the balm, as Leeds join the more comfortably mid-ranking. But it’s the crowd of celebrating players I’ll keep going back to, maybe even for another thirty years. A gang of Leeds United players channeling Arthur Seaton’s 1950s defiance in Saturday Night and Sunday Morning: whatever people say about them, that’s what they’re not.