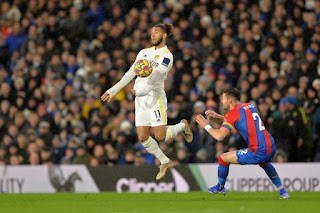 Leeds United needed that win over Crystal Palace oh so badly but they had to work hard for it.

Here is the YEP take on the heroes and villains of an intense night at Elland Road.

He couldn't do his job for two years, or at least the bits of it that make it his dream job. Watching him take in the applause from fans before the game as he warmed up, it was obvious that he's entirely present, living in the moment and not taking it for granted. When the game started, he took another huge step forward in what is still very much a comeback. Despite running further than any other player at Brighton on Saturday night he gave everything on Tuesday night against Palace and still looked to have energy to spare. What makes him so vital to Leeds is the way he takes care of the ball. They'd been missing that badly. And for all the talk of the player Conor Gallagher could have been for Leeds, it wasn't the Palace midfield who won the day.

His presence in the starting line-up was met with a predictable response on social media and although he couldn't add a goal or assist to his game he ran his socks off, helped Leeds tremendously and went off to an ovation that was deserved.

It has been a difficult period for the Leeds boss and that win was a huge relief. Bielsa has come under fire at various stages of his time at Leeds, often quite unreasonably, but there's no doubt it has been a struggle to get the team playing as they can this season. A win, a clean sheet and a better performance. Just the tonic.

Rift? What rift? A performance of grit and determination. That tackle on Gallagher was a beauty and it set the tone. His post-match interview was timely and perfectly put.

It will not have mattered that he only came on for a very short amount of time, what will have mattered most to Charlie Cresswell is that when Bielsa needed someone he could trust to defend any last-gasp Palace attacks, he called for the youngster. Securing the win and the clean sheet was vital and to be answer for Leeds would fill any player with confidence. Being on the pitch at the final whistle for the celebrations was a nice reward.

His performance wasn't that bad, but his miss was. Goals are so helpful to Rodrigo's confidence and form, and Leeds are in desperate need of them so that moment in the second half was haunting.

Proved more than a handful but couldn't finish one of his chances. Watching Illan Meslier somehow claw the ball off the line looked agonising for the striker. The header was a glaring miss and a massive let-off for Leeds. Had it gone in it would have changed the complexion of things completely and shone a very different light on Leeds' performance. The winners write history, though.

His battle with Dallas and the number of times the Ulsterman got the better of him left him more than a little grumpy. When Benteke headed his wonderful cross wide, that made him even grumpier.

It's quite the feat to have the country talking about Leeds before a ball is even kicked on a matchday. His programme notes were always going to be a talking point but the comparison he made was headline stealing and felt unwise, at best.

There's comfort in routine and before the game you always see the same things. Phillips staying out longer than his team-mates as the warm-up ended to try his luck at an empty goal from 40 yards. Forshaw's wave to his family in the stand as the teams lined up before kick-off. Dallas fetching a water bottle to place just off the pitch in the right-back position. Those moments are nice to see, a little familiarity at a time when Leeds aren't looking exactly themselves. There are also moments you don't often see that gladden the heart. Pascal Struijk driving a shot at an empty goal towards the end of the warm up, striking the ball sweetly but entirely without accuracy, straight into a photographer and his tripod was one of those. No injuries, all smiles, an apologetic wave.

When all of Elland Road was losing its mind in the wake of Raphinha's penalty, the Leeds bench were taking action to secure victory, sending for Charlie Cresswell who was warming up. The urgency in the Leeds technical area showed that while relief was coursing through their veins, heads were sufficiently clear to make big decisions.