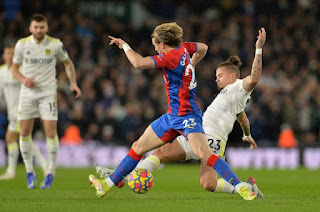 Kalvin Phillips has fired back at suggestions he has fallen out with Leeds United boss Marcelo Bielsa.

The England international addressed claims there had been unrest behind the scenes at Thorp Arch between himself and the Whites boss on Tuesday night.

Bielsa's men earned a dramatic 1-0 victory over Crystal Palace in the Premier League in LS11.

Star man Raphinha calmly converted to hand Leeds a third victory of the season and sent the home crowd wild.

Phillips - who completed 90 minutes against the Eagles - opted to take the moment post-match to address any claims that he had fallen out with his head coach.

Pundit Jamie Redknapp suggested the Three Lions man wouldn't have been happy at being substituted at half-time against Brighton last weekend while a week earlier Robbie Keane questioned his post-match interview at Tottenham.

"I saw a lot of things on social media and TV that me and the manager had fallen out, it's never been the case and I wanted to put that to bed."

🗣 "There's been a lot of talk about me and the manager falling out... I respect him so much, I'd never fall out with him!"

Asked about the victory and what a boost it would provide Leeds, he added: "It's a massive relief, I think we deserved the win, created some good chances in the first half.

“We got a little bit lucky in the final minutes with the handball. We're just very happy. There is always concern when you are creating chances and not scoring. We started struggling this season, so we are happy to get the three points.

"Rafa is a very good player and oozes with class, so I didn't expect anything else [than him to convert from the spot]. It is a massive win for us, we are very happy and have to try and go on a run of games now - we have a tough run of games before Christmas."