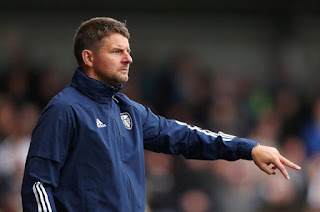 The Whites fielded a strong line-up in York as Joe Gelhardt was handed a start alongside Cresswell following the return of Patrick Bamford and Luke Ayling to the first team squad.

Jamie Shackleton was also given second half minutes from the bench in a bid to keep his match sharpness up.

It was Leeds who asserted their dominance on the game from the first whistle as Gelhardt forced Jakub Stolarczyk into a strong save.

Ethan Fitzhugh went close twice from two free-kicks but it was the United No 9 who opened the scoring.

Gelhardt linked up well with Sam Greenwood and broke through the Foxes backline to lift the ball home and earn a deserved lead after a period of dominance for Leeds.

The game, though, turned on its head in the 32nd minute as Cresswell was sent off for a second booking after pulling Tawanda Maswanhise down on halfway.

His dismissal gave Leicester life with the visitors failing to muster much threat beforehand.

It took until after the break for the game to be levelled through Fitzhugh as he headed home a cross which deflected into his path.

The striker then scored again with a fine volley to put his side ahead at the end of a clever move.

Leeds responded by working chances for Stuart McKinstry and Greenwood but it was the hosts who put the game out of sight from a set-piece late on.

Fitzhugh turned provider this time for defender Bayli Spencer-Adams who produced an inch-perfect diving header to seal all three points.

The defeat leaves the Whites in the bottom two of the PL2 division without a win in nine league games.

"Ultimately the red card has cost us," Jackson said post-match.

"Up until the sending off everything we spoke about with the players and highlighted before the game was working to good effect.

"It's naivety. He [Cresswell] said to me he didn't think he was on a yellow. Listen, mistakes happen in football. We just need to know how to deal with games and combat those situations.

"They were poor goals to concede again from our point of view. We'll keep the belief and we'll keep working."